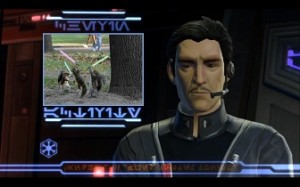 Recently on torwars.com, SWTOR’s Jeff Hickman said that there have been “unfair and somewhat misinformed negative discussions” recently regarding the game. Pulling out that old chestnut is best compared to PR Suicide –  It’s insulting to the community to call them misinformed and it’s insulting to say that their issues with the game are unfair. But what’s more, I call bollocks. There is nothing unfair or negative about the community calling out a series of blunders for what they are: Pay-to-Win creeping into the game and broken promises. Intentional? Maybe not. Real? Yes, very.

This began with the grade 7 ship components being released on the Cartel Market, and the uproar about pay-to-win entering into another part of the game. All but the most twitch-reflexed space players need those items to even participate in the new space missions, and there they were, for sale. Yes, it’s not a huge part of the game, but it is another part of the game (more on that later). What’s more, this led to the relegation of cybertechs to second-class business-people when they couldn’t compete with the cartel-coin-bought ship gear listed on the GTN. Considering the in-game time and/or currency investment to acquire the needed materials to craft grade 7 ship gear, cybertechs were squeezed out of the market. If you look at the market as a minigame of business, then that’s a second pay-to-win area affected by the gear-for-coins sale. It’s not unfair of cybertechs and those ardently opposed to pay-to-win to be up in arms, critical, and loudly negative about what happened. What’s more, the truth of this bears out in the apology SWTOR’s Damion Shubert released.

To be fair to the community, the pay-to-win grumbling began with top-tier crystals being made available on the cartel market, but that was shrugged off as a minor boost by those hopeful that BioWare wouldn’t do to it’s MMO what it does to its single player games. There was, and is, artifact-quality gear buyable on the market for players under level 50, which raised another small flap. That really doesn’t add any power to end-game activities, in all honesty. Bear in mind, however, that in the under 50 PvP bracket, artifact gear is a significant advantage, and there are people who play the sub-50 PvP game exclusively. These small advantages in isolated parts of the game experience have been adding up more and more. Most often, where there’s smoke, there’s fire; That white wisp in the air is starting to look less like some harmless fog and more like smoke, and the community is catching on. The community is not being unfair; they’re being invested, and empowered.

The change of Makeb from a free offering to a paid offering is disconcerting. While it is true that staff has turned over and strategy shifted, it was previously stated that Makeb was going to be as big as an expansion, and completely free to all subscribers. Granted, there was no free-to-play at the time, so I understand charging free-to-play members for access, just like Section X. I do not understand charging subscribers. Not only is it another broken promise from BioWare about this game, it also defeats the purpose of a free-to-play model with layers of premium strata. New content does come at a price to produce, of course, which is why there needs to be a revenue stream to cover the cost. That stream, for subscribers, can be in new vanity items that are unrelated to the content. While this sounds like it should apply to all expansions, this is not the case. The future is wide open – as long as players are informed and informed accurately that the next expansion will come with a cost. For a great example of how this has been done, look to The Secret World, with Issue 5 being given away for free to everyone who buys the game before Jan. 7th.

One Response to “Imperial Analyst: Is the Community Unfair and Misinformed?”