This week we received our first patch of 2013. Along with fixes the patch included some new items on the Cartel Market. Now not all the changes were well received, especially those making changes to a couple existing armor, the Phantom and Spymasters gear sets, which were purchased through the Cartel Market. As a result many players voiced their displeasure on the forums. How would BioWare respond to these players?

I think everyone has found something in the game that we did not agree with whether it is a specific change, update or fix, but a response from the developers has been sometimes lacking. That is why in this instance, even though some of us spent Cartel coins on items that were changed, we finally got what we have longed for…a real response. Damion Schubert stepped up and gave us a reply. It is quoted in full below. 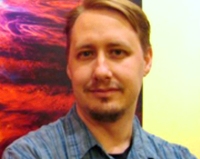 Hey, guys —
We care a lot about the fact that you care about the appearances of your characters. In fact, the Mod system is my baby, largely because it allows players to customize their appearance to your liking. We have another, similar, one of my babies coming in the near future, which will allow even greater customization (you guys may have seen me hinted about it in recent interviews). Short form: this is real important to me, and we’re not happy that we’ve created a situation that makes people unhappy. We didn’t think through the ramifications of the bugfix that we’ve made, and we’re acutely aware of the financial angle (cartel coins as well as in-game credits on the GTN) involved.
We are still discussing potential fixes to the issue — and there will be fixes — but there are ramifications to all fixes. Players should keep in mind that previously, we had players who were upset in the other direction. We have a couple of directions that we can go, but we need to explore a couple of things, and regardless, it is not a fix that can happen instantaneously. I do think we can get something in a patch very soon.
We are pretty sure we can avoid a solution that forces players to spend additional cartel coins, and I’m not interested in letting a situation linger that leaves the player’s faith in what we are offering on the cartel market in a reduced state. It is incredibly important to me, and the rest of the SW:TOR team, that players have a high degree of confidence in the market as a whole, and how we deal with issues like this. This has been a learning experience for us, and won’t happen again.

In short: we’ll fix this. Give us a little time to do so.
Damion Schubert
Lead Designer, SWTOR

Although the post did not fix anything, it has done one thing many of us have been wanting. Finally, we got a response that was matter of fact. It did not give a time as to when it would be fixed, but Damion treated us like adults and was honest. I personally would love them to do more of this. If there is a delay, or there is something that cannot be fixed, or whatever, just tell us point blank. Yes, there still will be some people upset and frustrated, but there will also be a better sense of communication between the developers and the game community.

Now that is my feelings on the post by Damion Schubert, how did you feel after reading his post? We would love to read your thoughts in the comment section below or try our new voicemail option located on the right side of the web page.

This week we have another creative music video by a member of the SWTOR community. The video is a parody of the song “Baby got Back.” Yes, this song may not be familar to all you youngsters, but back in my day lol. So without any further ado here is “Baby got Bubble.” It is a perfect video to bring a smile or even a laugh that might help to brighten your day. Enjoy!

Just wanted to correct something I said earlier. The information I received earlier was incorrect. Players may have their base character slots and up to ten extra character slots. For example, a subscriber with 12 character slots may increase their character slots up to 22. You can still have 350 characters overall. Apologies for the confusion.

It is good to finally have clarification on the character limit rules that came with the new patch. This is another “fix” that I believe BioWare should have clarified well before it ever went live in the game. Now it might have been just me, but when I read they planned on following the strict 12 character slot limit, I figured that meant I would lose those extra characters that were moved automatically during the server mergers. Thus I deleted some of my extra characters that were originally on other servers. Did this impact any of you? If so let us in the comment section below.

Hi folks, after investigating this issue, we have discovered that the bug fix that we implemented in 1.6.2:

has affected any unlocks that were on the GTN and in mailboxes. Please submit an in-game ticket for CS if you have been affected by this. Apologies for the inconvenience.

This is another fix that has produced some unforeseen effects to various unlocks. Be sure to read the post and fill out an in-game ticket to customer support and hopefully it will get resolved quickly.

Hello,
I have been fortunate enough to be a part of some of the on-site player tests that we’ve hosted here at the studio and I can honestly say it has been a tremendous help. So if you happen to be in the area and have some time to do it we would really appreciate any feedback.
As a UI Programmer, having players come on site gives me an opportunity to observe where UI may or may not be working and hear first hand what their suggestions are for what features they might want to see. It is also great to be able to ask them questions on the fly that the discussions bring up.

This is a great opportunity for any of you in the Austin, Texas area to get involved in some testing to help BioWare. Be sure to read the first post in this thread and find out how to get involved in testing at BioWare Austin. I would love to be living in the area and take advantage of this chance to not only visit a development studio, but also help test out SWTOR for future improvements to the game.

As you read through our writers’ articles and listen to the podcast, take a moment and submit your feedback and suggestions in the comment sections. We love to hear from you. Thanks and enjoy the links below. 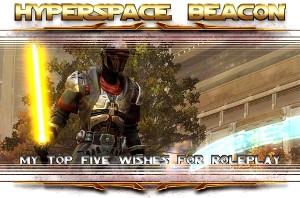 Larry Everett, from Massively, has written up his top 5 wishes for roleplay in SWTOR in his latest Hyperspace Beacon article. He first lists more clothing variety in the game. As many players, especially our own Maer, have mentioned several occasions that BioWare needs to give us more clothing/armor variations. One thing in Larry’s article, he points out all the NPCs wearing different clothing that is not available for players. The advantage of this is that the most of the programming and artwork is already done. They would just need to make sure the clothing would fit on all player character model sizes.

Next on his list are chat bubbles. This might not seem important to some players, but for events, especially those involving the opposing faction, the lack of chat bubbles make it nearly impossible to keep up with conversations. This could lead to fewer community based events and anything that takes away from the community, means less players happy and eventually less of them playing SWTOR.

Along these same lines Larry mentions wanting more “practical” emote. We just got the new emote backflip, but yet we cannot sit in chairs, lean against a wall etc. Again Larry points out that the code already exists because NPCs are doing these very emotes.

The last two of his top 5, I strongly feel should be looked into by BioWare not just for roleplayers, but a strong case could be made they could be used as a fill-in for the lack of complete Open World PVP.  His suggestions are a Group Dueling option and Open Instanced areas. The Group Dueling option is pretty straightforward…it would give this group the ability to duel another group. This could start some great guild versus guild action. Now the other item he mentioned is the areas in the game used for class story quests, heroics, etc. These rooms, caves, bunkers are sometimes huge in size and are relatively unused outside of the previously mentioned reasons. Larry would like to see these be used for roleplaying areas and I agree. However, I also think they also offer a great opportunity organized “somewhat” Open World PVP. BioWare could set a group limit, like they have already in heroic and operation instances. Now there might also need to be a level range limit if the group selects PVP. The instance area could still be used as Larry envisions by the group selecting the social meeting option. In the social option, the group limit could be expanded and also there would be no need for a level limit. Now these are Larry’s top 5 wishes for roleplaying, what would be your top 5? Let us know in the comment section below.

That’s it for this week’s HoloNet Links. If you have a particular link, story, video, or topic related to SWTOR we would love to hear about it! You can send those to us here at Corellian Run Radio and we can place it in a future article. Just email us the links and/or the details for the event at corellianrun@gmail.com, or you can also leave any link suggestions in the comments below, or in Corellian Run Radio’s Facebook group. Thanks and see you all next week!