When looking for a group to interview for this week’s article, I came across the Dark Jedi Brotherhood on Twitter. I will admit when I first sent out the invite I thought this was just another guild. It was when I started doing additional research that I realized they were much more. Today we will look into a society that was formed around the mid-nineties that had very little to do with gaming, as far as video games. We will see that though they have evolved into having a gaming side, including a guild in SWTOR, there is much more to their Star Wars based society.

Two of their officers gladly answer our questions after the Jump…

Can you explain more about the Dark Jedi Brotherhood? How does this “society” fit in the SWTOR game?

Muz: The Dark Jedi Brotherhood(DJB) is a Star Wars Club.  We do gaming, fiction, and graphics competitions, and have a very well developed backstory that our members participate in building.  The brotherhood fitting into TOR is rather interesting, because the club is set many years after the movies, where TOR is obviously set in the Old Republic years.  As a result, some players use the game to roleplay ancestors of their Brotherhood characters, or just ignore the timeframe and enjoy it as a game. 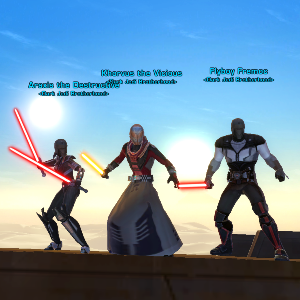 Action Pose while we wait for the balloon

How did the group get started? What all games, activities and events, both in-game and real world, does the Dark Jedi Brotherhood take part in?

Muz: The Brotherhood was founded back in the mid-nineties, as a chat-based group for loose RP.  It evolved to take advantage of more gaming stuff with the advent of games like TIE fighter, Jedi Knight and the like.  With less and less multiplayer LucasArts games being released (TOR being an exception), the Brotherhood has done a lot more with the fan-fiction side of things.  We have had an unofficial presence at things like GenCon and DragonCon, but it’s more due to having many members going to the events.  One of the biggest things that we do nowadays is run big club-wide events called ‘Vendettas’, which pit our sub-units against each other in both gaming and creative-based competition.  There’s a progression to our storyline that happens with these events, and we have been putting some comic books out that help explain it to the members.

The group has a very extensive amount of information about each part of the brotherhood. Was this the vision of the group when it was started or did it just branch out from growth and new membership?

Muz: I don’t think anyone planned that we’d still be around now.  It’s a natural evolution.  Members contribute in ways that they like most, so we naturally get pretty detailed expansions as our members find more ways to do cool stuff.

The DJB has a very detailed system for ranking in the guild and also a clan based system. Can you explain more about the clan system and how it functions in the group?

Muz: People are competitive by nature a lot of the time.  We decided, very early on, to help delineate teams for people to play on.  This term became Clans (and the smaller ‘Houses’), kinda independent from the term that gaming has developed for that.  These Clans and Houses have their own histories, and can get a little cliquish at times, but our members are often fiercely loyal to their Clans. 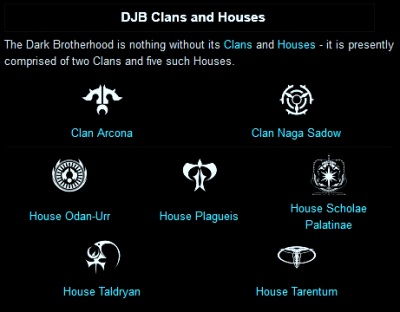 Although the DJB is involved in many Star Wars games etc. how has the group/guild taken to SWTOR? Are there some elements you would like to see BioWare include in the game?

Archangel: When we heard that Bioware was building am MMORPG, we were of course stoked. How often does one of the masters of the role playing arts build something of that magnitude? And when the fact that it was a Star Wars game was released, we just about exploded. We spent the months before the release building plans, contingencies, recruiting, organizing, and the whole she-bang.

Originally, we had just the two guys planning it all out, Fremoc and Araxis. Fremoc’s in charge of the Gaming in the DJB, and was given the task of developing our strategy to introduce SWTOR to the club, and the club to the world of SWTOR. Pretty soon after they began, they realized just how large a scope the game had, and drew in more help, namely myself, and some of our more veteran members.

Since the release, we had a huge influx of old members into the guild, building it up quickly, as well as sizable interest from the server population in our organization. Some of our best Officers right now are recruits from the server! We have two guilds, our main guild which is called the Dark Jedi Brotherhood, and our Republic Guild, Knights of Odan-Urr. 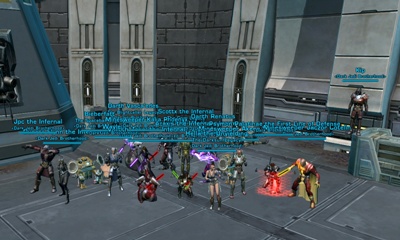 We would be more interested in seeing more guild features, such as a guild ship, upgrades, and similar. Some more story expansion would be fantastic, as well as a more dynamic gaming experience. We feel that if we are required to run an operation a couple dozen times just to get a certain item, it might be nice to have a surprise or two every time. 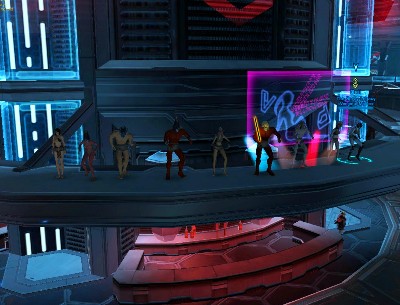 Archangel: We have some mixed feelings, as with all patches. Some of us are excited to get new content to work with, and play, and the increase in the level cap gives us more points to spend. However, others have pointed out the lack of real character progression, and say that the expansion is little more than a stop-gap. We’ll have to see what happens. 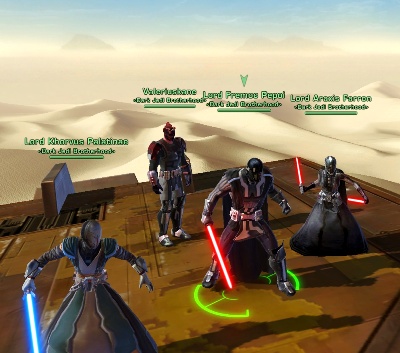 Fremoc, Araxis, Valerius and Khorvus waiting for the balloon on Tatooine

With the new reputation system being added in the future, what do you think about this? Do you think this could be something to bring about a possible third faction or faction switching?

Archangel: With all new additions to the game, there is always a moment or two of skepticism. With the reputation system, it seems, in a way, just a way to keep people playing for longer, and not adding real content to the game. I personally want to know what happens with my sniper. Does he kill a major Republic General on Coruscant? Does he get captured, tortured, and has to escape from prison? Reputation doesn’t really help me extend my personal story, but it does expand the faction-based story lines.

As for a third faction and switching, we aren’t too worried about it. We are a purely Imperial unit (with a traitorous Republic element), and will almost definitely stay that way. 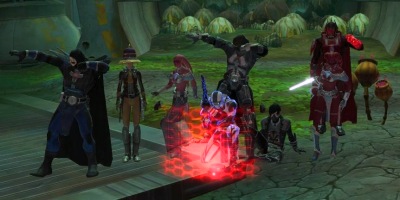 Besides gaming the guild has several other activities, like fan fiction and poetry, for fellow community members to participate.  How did these activities get started? Where can people go to read or possibly submit their fan fiction or poetry?

Muz: As I mentioned before, we never were really a gaming-only club.  We have had a lot of members join over the years that just aren’t terribly great at gaming, but still wanted to compete.  We also have seen a dwindling in multiplayer LucasArts games over the past few years that has changed the primary thrust of our club.  We could get more into Halo or whatnot, but most of our members are here because they love Star Wars (specifically the Dark Side), and those things aren’t in the vein of what they wanted to do.  We can always write fictions, regardless of if our computers can run the newest game, or if LucasArts doesn’t release a new game for a decade.

We are usually running some sort of competitions for our members.  We have a pretty sprawling set of forums available, as well as a pretty active wikipedia project where members often put up links to their stuff as well.

On the main page of your website, it has training as a menu choice. What is all the training for? The first on under that heading is the Shadow Academy. How do new recruits take to the training? Is this done in-game or something done via other avenues?

Muz: The training is really there to help explain all of the various activities that the Brotherhood does.  We’ve got an awful lot of things going on, and it can be pretty daunting to a new member, so we use the Shadow Academy to help teach people about these things.  Older members will go in for the more trivia based courses, just to get their geek on.  These training things are generally web-based, but we have a few almost ‘apprenticeship’ style programs as well. 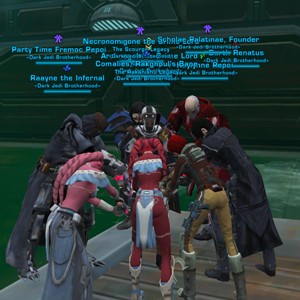 Is the Dark Jedi Brotherhood currently recruiting? How can people get in touch with the guild and what steps do they need to do as a new recruit?

Archangel: Of course we are recruiting! We would love to expand our raider base, as well as general population in the guild. Besides the guild recruitment, we are always on the lookout for people for the general club, those who are interested in writing, other SW games, and graphics just to name a few.

For information about the guild, you can message Fremoc, Archangel, Kalia or Raayne on US-East Jedi Covenant server. Or, you can go to our website.

To join, you have two options, one is a general join, which throws you in with the normal population of the club and you can get involved that way. Follow this link to join in that way:

To join specifically for SWTOR, we have a separate join form:

There are plenty of steps for a new recruit to take. Best would be to join us on IRC (Undernet servers #db or #dbgaming) or Teamspeak and we can help you out!

That’s it for this week’s Community Checkpoint. I want to take time to thank all the members of the entire Dark Jedi Brotherhood. Also want to thank Muz and Archangel for their time answering the questions for the article and helping us all learn more about their club and their guild. If you have not yet checked out their website, I strongly urge you to head over there. They have a little something for all Star Wars fans…artwork, fan-fiction, Star Wars facts, “old-school” RP in the Star Wars EU and basically a complete overload of Star Wars goodness. I want to wish all the best to each one of their members in all they do and here’s hoping their society keeps going for more decades to come.

Would you like to have your guild, in-game event, or community activities highlighted on Corellian Run Radio website like the Dark Jedi Brotherhood? All you need to do is submit your website or forum link, along with some basic information in an email to me at, jason@corellianrun.com. You and your group could be who we highlight next here on Corellian Run Radio’s Community Checkpoint. Thanks and see you next week!