BioWare’s Drs. Ray Muzyka and Greg Zeschuk participated in a keynote panel, “Game Changers: A Conversation on the Nature of Interactive Entertainment from some of the Medium’s Most Significant Creators” at this year’s DICE Summit. The Doctors were joined by Mike Morhaime from Blizzard, Mark Cerny from Cerny Games, and Bruce Shelley from Zynga.

Zeschuk acknowledged World of Warcraft’s dominating influence on the MMO industry. “It is a touchstone,” he said, as reported by GamesIndustry.biz. “It has established standards. It’s established how you play an MMO. Every MMO that comes out, I play and look at it. And if they break any of the WoW rules, in my book that’s pretty dumb.” END_OF_DOCUMENT_TOKEN_TO_BE_REPLACED 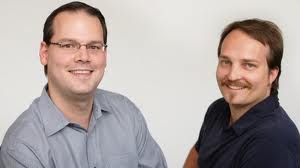 Dr. Ray Muzyka and Dr. Greg Zeschuk will be the fourteenth and fifteenth members inducted into the Academy of Interactive Arts and Sciences Hall of Fame.  They will accept their award for their groundbreaking work in such games as Baldur’s Gate, Mass Effect, and Knights of the Old Republic in February 2011.  This will be the first time two people will receive the award.  Read full article at Gamasutra.com here.