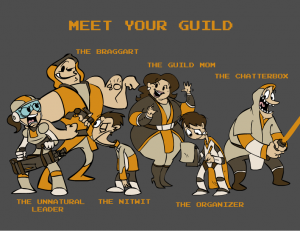 A look at a few guild archetypes you will most likely see in Star Wars: The Old Republic

Historically speaking, RPGs have never been much of a social activity.  You could feasibly make a weekend out of inviting the guys over to hang out, have some beers and play some Halo.  I don’t think anyone would have nearly as fun a weekend if we did the same thing with Dragon Quest.  Considering the narrative and gameplay constructs of traditional RPGs, it would be like inviting someone over to read a book with you.  RPGs are a solitary past time, they’re generally meant to be a single-player experience.  Unless I can toss a friend a controller and ask if they want to join in, I feel rude playing a game in a social situation. END_OF_DOCUMENT_TOKEN_TO_BE_REPLACED 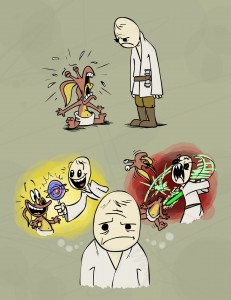 [Editor’s note: Today we welcome Noah to our growing writing team at CRR.  His first piece is a look back at the highs and lows and highs of growing up with Star Wars, with a particular emphasis on the redemptive power of Knights of the Old Republic.]

Star Wars is one of the things in my life that I am completely unable to remain unbiased towards, in my mind it’s beyond reproach.  The original trilogy is scripture to me.  Few things have dominated my development like Star Wars; it maintains a holy position on my shelf of childhood obsessions.

More “Recovering From Disappointment” and Comments after the jump. END_OF_DOCUMENT_TOKEN_TO_BE_REPLACED