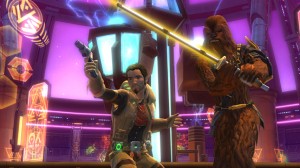 This week Carla & Deirdre are joined by Drew where they talk all about this week’s State of the Game #2 post by Jeff Hickman, sales price deadline for the expansion, European community cantinas, and more.

FACT OR FICTION:  Can you pick out the true fact? This week’s fact or fiction is all about this week’s State of the Game #2.

More Episode #87 and Comments after the jump… END_OF_DOCUMENT_TOKEN_TO_BE_REPLACED

Happy One year Anniversary SWTOR! Yes, today, Dec. 20th, is the official anniversary for the game. Oh what a year it has been. From the early days of players wandering around the starter planets trying to find those elusive datacrons, to attempting the harder challenges like the Explosive Conflict Operation on Nightmare mode, or to dominating the Ancient Hypergate warzone. Even as we look back over the past, we have gotten a glimpse of things to come in the upcoming year with the expansion titled Rise of the Hutt Cartel coming in 2013.

END_OF_DOCUMENT_TOKEN_TO_BE_REPLACED

Welcome to the war, comrades. You have been selected to receive the latest training and tactics fresh from the warfront. The tried-and-true strategies you are about to hear are extremely effective and CLASSIFIED. Let’s get to the briefing. Today we are talking about gearing up for battle.