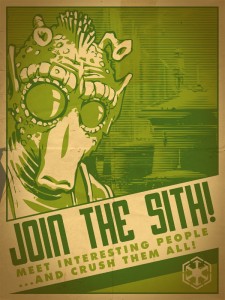 Studio Insider: Starship Design
Still feeling the warm glow of that announcement, we settled down to enjoy a closer look at how starships go from concept to production.  In today’s Studio Design article, “Starship Creation,” Ryan Dening and Christopher Reeves walk the END_OF_DOCUMENT_TOKEN_TO_BE_REPLACED

This week’s update will make all the art and lore fans happy.  First up, Fan Friday.  The Community Creations section features fan art, animated Jawa smilies, and a choose-your-own-adventure style comic.  Next, a Developer’s Corner look at the creation of Kaas City, the Empire’s capital.  Senior Concept Artist Ryan Dening gives us another step-by-step demonstration of taking a concept and turning it into a finished piece of artwork.  New Bounty Hunter avatars and Ithorian smilies round out the artistic portion of this week’s update. END_OF_DOCUMENT_TOKEN_TO_BE_REPLACED

We got a second video this week!  Developer Dispatch, “Designing the Light Side,” features interviews with writers and artists as they discuss the choices made for Jedi Knight and Consular in appearance, gear design, visual combat effects, and more.  And yes, the male Jedi Consular looks even more amusing than the female in that funky headgear!  Please oh please may we have Show/Don’t Show Helm option.

Video, Fan Friday, and polls after the jump. END_OF_DOCUMENT_TOKEN_TO_BE_REPLACED