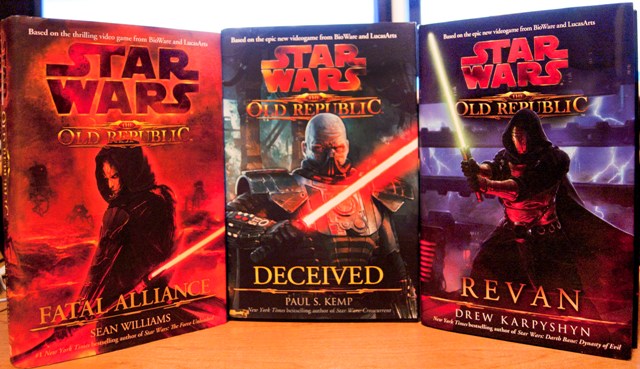 Three books have been released as a precursor to the release of Star Wars: The Old Republic. A fourth one by Drew Karpyshyn is on the way in Fall of 2012. Fatal Alliance by Sean Williams was released during the Summer last year. Highlighted in the book are all eight classes from the game. This past Spring another book was released. Deceived Paul S. Kemp describes the attack on the Jedi Temple, as seen in the Deceived trailer, and the aftermath of that attack. Finally, released last month the long awaited answers to the Revan saga is penned by Drew Karpyshyn in the book aptly titled Revan.

The first book Fatal Alliance Is set around the same time frame that we’ll be logging and taking our own adventure. The year is 3,643 BBY and the Republic and Imperial forces must put aside their difference to take on a much more dangerous enemy that threatens to consume the Galaxy. The one of the main character’s is Larin Moxla a representative of the trooper class. Former member of the special forces unit Blackstar Squad, she joins forces with Shigar Konshi a Jedi Padawan and Ula Vii an Imperial Agent posing as a Republic delegate. The three get into a weird love triangle sub plot, but don’t think Moxla plays the damsel in distress. That distinction went to Ula the Imperial Agent.

The writing, story and character development were good. If you’re not familiar with Star Wars lore you may find yourself looking up certain weapons or even species. To me it felt like this book was focused more on show casing the eight classes and some of the abilities you may see in game. When the book was released there wasn’t as much information about the game as there is now. so some of the luster of reading the book was devouring any morsel of information you could find about the game. The story was slowed by the fact that each chapter featured the point of view of a different class in each chapter. This meant rehashing some of the action at the end of the previous chapter in the beginning of the next chapter ala a different point of view.

Overall I thought it tried tying itself to the game a little too much, but it was an enjoyable read. How reading the book today and the wealth of information we have now impacts the story I can’t say. If anyone has read it recently for the first time I’d love to hear their impressions.

The next book Deceived is the best book of the trio and is based in the year 3,653BBY. It not only gives Darth Maglus’ point of view in the Jedi Temple attack, during the Sacking of Coruscant, but it also describes the aftermath of that attack. For those that don’t know Master Zallow was the Jedi Knight who took on Malgus in the Deceived trailer. Zallow’s former apprentice Aryn Leneer, now a Jedi Knight, goes on a journey to find and confront Malgus. To do so she must enlist the help of a former trooper buddy Zeerid Korr. Zeerid also known as Z-man is a trooper turned smuggler who served in Havoc Squad along with Aryn, but began smuggling to help pay for his daughters medical expenses and to provide her with a better life.

What I liked about this book is that the conflict isn’t a galaxy ending threat or a massive space station. Instead the conflict is between Malgus and Aryn and the lightside verse darkside choices one makes. I liken it to The Empire Strikes Back which also focuses more on an inward and outward conflict between two characters. If there’s a tie-in to the game it’s the lightside or darkside choice’s we make throughout the game.

What I liked about this book is that it has the ability to stand on its own. You don’t need to have played Knights of the Old Republic or plan on playing Star Wars: The Old Republic to get the full experience of the story. If you know someone only familiar with Star Wars movies, you can recommend this book with confidence. Deceived is well written and well worth the read.

This brings us to the third and final book Revan. This book tells the story of what happened to Revan as he ventured into the Unknown Regions for a second time. Included in that journey are answers to his first trip and his confrontation with the Emperor.

Everything leading up to the ending of the book is good. Loose ends to some of our favorite characters are tied up, but more importantly it answers the burning question of what happened to Revan. Unfortunately like Fatal Alliance and possibly even worse is the tie-in to TOR.

Instead of answering what transpired three hundred years ago and giving a fitting ending to an iconic Star Wars figure, Karpyshyn instead decided to tie it into the new game, more specifically the Jedi Knight class. If you want a conclusion to not only this book but also the Revan saga it looks like you’re going to have to play the Jedi Knight class to get the most bang for your buck.

It’s still a good read, and I would suggest it for the lore aspect, but don’t expect to come away satisfied.

As a fairly new reader of Star Wars literature (my previous read being the X-Wing: The Official Strategy Guide), overall I thought the books were well written and highlight the game well. I didn’t particularly care for the seemingly forced tie-ins to the game, but I know why the did them and I imagine it’s a matter of perspective of whether or not it was good or bad for the books. I would highly recommend Deceived to anyone, I would recommend Revan to anyone who has played any of the Knight of the Old Republic games or anyone interested in the lore of The Old Republic time frame and I’m curious to know how Fatal Alliance reads now, but it is typical of the stories you see in game.