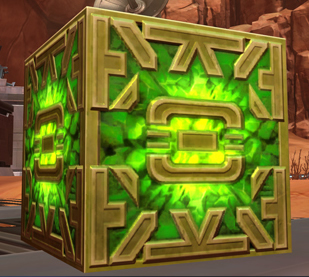 If you’ve temporarily had your fill of class missions, world missions, space combat, crew skills, Flashpoints, and Warzones, you may find yourself wondering what else there is to do. One great option is to go looking for Datacrons. No matter where you fall on the MMO player Bartle Test, no matter how you prefer to spend your time in an MMO, there is probably something that appeals to you when it comes to Datacrons.

Datacrons are ancient cubes spread across the galaxy, remnants of the Infinite Empire (which KotOR fans may remember) that lend a permanent boost to one of your primary stats. Every planet has some of them, either laying hidden or in difficult-to-reach places. So, what kind of player are you? Achiever, Explorer, Socializer, Killer? Read on to find out why Datacrons may appeal to you.

If you take a look at the Datacron section of your Codex, you’ll find a number of how many Datacrons you have discovered over how many there are total. A similar number can be found in each planet’s codex, which details several different types of Achievements. Considering the challenge in acquiring some of the Datacrons – which often require jumping from place to place, after finding the right path to it – to find every single one is a notable achievement.

Datacrons are some of the most difficult things to find while exploring. Some of them may be easily in sight (but out of reach, until you find the right path), but others are hidden in the far corners of the map, or in the hard-to-find parts of cave systems. The great thing is, there are two ways that Datacrons and Exploration can complement each other: If you’re a hard-core explorer, you can set out across the planets and know that you haven’t fully explored everything until you’ve found all the Datacrons on your own. If you prefer to save your time, you can look in the SWTOR out-of-game community for guides and coordinates for the Datacrons. By going out and finding them, you’ll explore a lot of the interesting parts of the planet quite quickly. Either way you do it, you’ll be exploring the galaxy.

Since they rarely require any combat to reach, Datacr0n-hunting (along with Warzones) is one of the few aspects of the game that transcends level boundaries. As long as you have a ship, you can bring your level 20 character anywhere in the galaxy with your level 40 friends to track down every Datacron in the galaxy. Not only that, but some Datacrons actually require multiple people to work together to reach them. For example, one Datacron is trapped behind a force field that can only be bypassed by deactivating two different computer consoles on opposite sides of the room. There isn’t enough time to deactivate them both on your own before the other one resets. Even the Datacrons that don’t necessarily require groups are more entertaining to achieve with friends. When you and your friend both see a Datacron sitting atop a ledge above you, you’re going to have very different initial approaches to reach it. Competing with your friend to reach it first – or cooperating to reach it together – really adds a lot to the experience.

This is where the stat-boosting aspect of Datacrons comes in. While the stat boost of each individual Datacron is rather small, the difference is somewhat significant when it’s all added together. Truly competitive combat-focused MMO players, whether they focus on Player vs Player combat or cooperative ventures like Flashpoints or Operations, will find the stat boost to be enough that Datacron-hunting is certainly worth the effort. Use of online guides makes the process relatively painless while maintaining a lot of the fun factor. Speaking of fun… 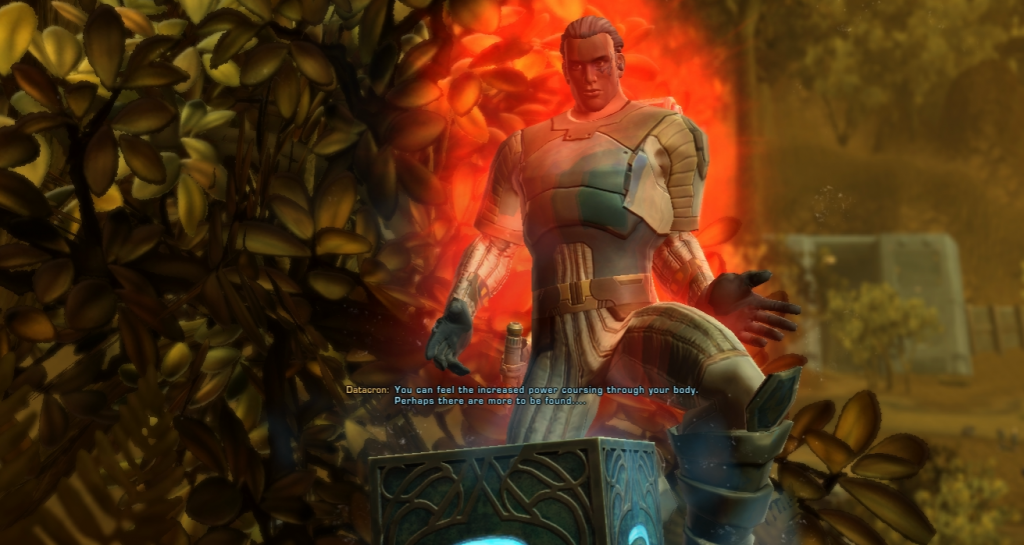 The Appeal to Everyone: Fun

While it can be useful to break the MMO population into categories to see how Datacrons are important to them individually, there are some aspects that transcend boundaries. Simply put, a lot of the Datacrons are very fun to reach. Even on some of the Origin worlds there are Datacrons that require a few well-timed jumps. This only becomes more complex as you reach the higher level planets. Eventually, the placement of the Datacrons provides a real puzzle. Solving that puzzle and finally seeing yourself imbued with the energies of the Datacron is more than enough of a reward in and of itself.

Don’t take my word for it, though. Go looking for Datacrons, if you’re interested. Whether you go by yourself or in a group with friends, you’ll have a good time.