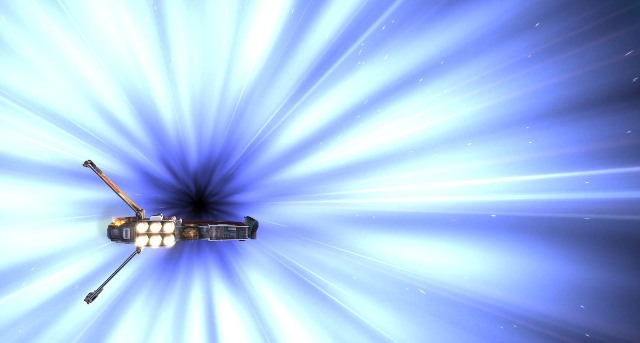 Leveling in MMO’s as a healer has always been less ideal. Enter Star Wars: The Old Republic and space combat. Obviously, anyone can jump in their ship and partake in the dog fighting to supplement the leveling process, but healers will find it especially helpful as it allows them the to avoid the pitfall of falling asleep while leveling or the high cost of respecing.

After receiving your ship not only do you have the ability to planet hop with ease but you can also participate, as part of a special fighter wing created by the Republic, in space combat missions. This article is meant to help you get your ship off the ground and into space combat.

More after the jump.

Like just about everything else in SWTOR you get commendations for completing space combat missions. With those commendations you can buy ship upgrades, storage boxes and even a flight suit. The seller of these fine items is S-4S0 located right behind Captain Gek in the Galactic Trade Market on the Republic Fleet. Imperials you’re on your own!* Ship upgrade vendors share an area with the speeder vendor. If you’ve bought a speeder already you know where the ship upgrades are.

*As I’m sure you’ve figured out by now just about everything is mirrored between the two factions. The location of vendors on the Imperial Fleet is no different. 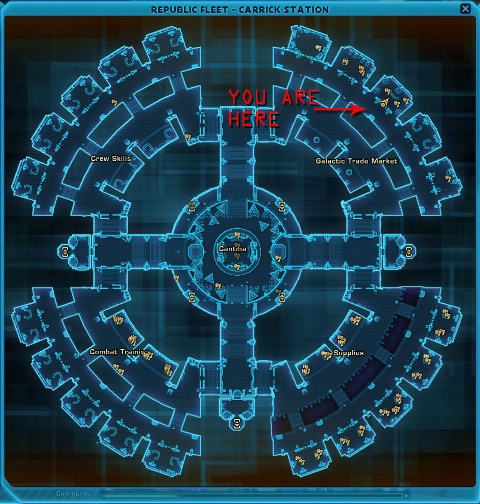 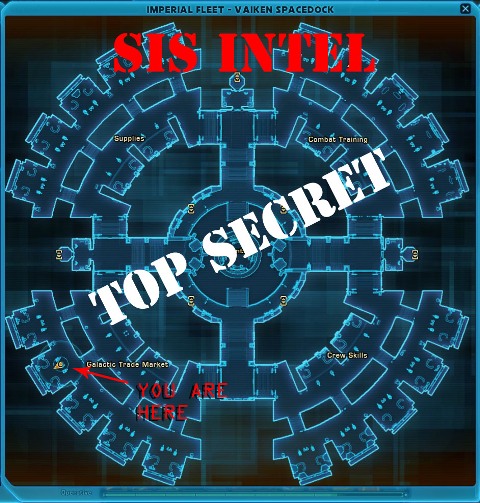 Ship upgrades via fleet commendations become available at 25, 35, 45 and 50. Equipping one of the fleet commendation upgrades to your ship will give you special abilities in your action bar to use during space missions. Just like questing using 1, 2, 3 or 4 on your keyboard will active an ability. Abilities can not be moved around on the action bar, so don’t bother trying you may end up in an asteroid. 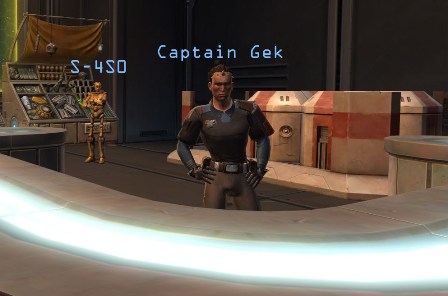 Upgrades can get a bit pricey so be careful not to go nuts on ship upgrades, being broke with companions to feed is no fun. Thankfully, space missions do provide a good bit of credits and sometimes even ship upgrades.

Every space mission has it’s own initial quest you can do. As you level more missions become available and the missions you already do have will become easier to do. Like any other quest though the more you out level it the less XP you’ll receive, the money and fleet commendations stay the same. After completing the initial quest for a space combat mission you’ll begin to receive dailies which typically combine two space missions into one daily.

Unlike pretty much every other Star Wars space combat, SWTOR’s space combat is on rails. While it seems to of stirred up a bit of disdain and Star Fox references* to me It’s like having a machine gun, with unlimited supply of ammo, on a roller coaster with targets to shoot at. If that sounds like fun to you then you’ll probably enjoy space combat.

*If you’ve never searched for ‘do a barrel roll’ in google, do it. Do it now.

Now I say roller coaster but that’s not entirely accurate, because you do have some maneuverability and you can still run into objects. Running into one asteroid won’t fail a mission but two could very well be the end of you. On the bright side that might finally silence C2-N2.

The most common targets in missions will be fighters. They’re easy to take out and often times are the bonus mission. Consider them secondary targets with the exception of escort missions. Fighters entering the screen will typically fly ahead for a few seconds and then loop back around. This allows you to focus on ther objectives that may not be on the screen as long.

Enemy Fighters don’t require blaster fire until they explode, usually once they begin smoking they’re done. Instead of waiting until they explode wait for them to go into a tail spin and then switch to the next target. Turrets and other targets can be shot through walls and ships; if there’s a red or yellow circle surrounding a target you can hit it. In one mission a star destroyer will pretty much park it’s engine right in front of you. You can still take out the turrets through the ship and they should be priority over the shield generators and engines.

At early levels avoid targeting the shield generators. You’ll recognize them by the blue ripples they produce when blaster fire hits them. They can be destroyed but they’ll require a lot of blaster fire, something you won’t have a lot of early on but will have after some ship upgrades.

Don’t overlook maneuvering to avoid blaster fire, especially if you’re objectives are completed and there’s still time on the clock before the jump to lightspeed and your ship is on its last legs. I’ve completed several missions just maneuvering to avoid blaster fire with low health. If you have the shield and shield regenerator upgrade’s holding off the trigger will regenerate your shields.

One final tip. If an escort mission is failed feel free to hold off retrying the mission or exiting combat. Your ship will continue along it’s intended path, helping you to identify how much farther you had to go and what obstacles to expect.

Please keep your hands and arms inside the ship at all times and enjoy the ride. 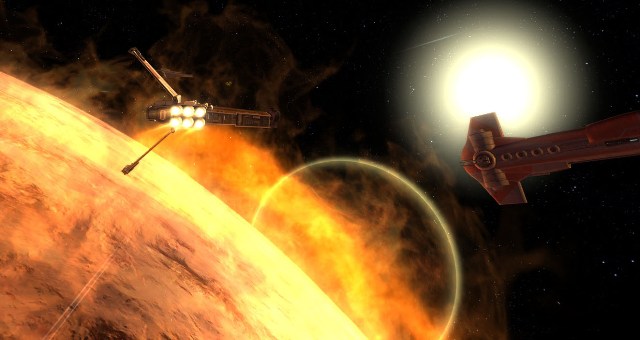