Welcome to the war, comrades. You have been selected to receive the latest training and tactics fresh from the warfront. The tried-and-true strategies you are about to hear are extremely effective and CLASSIFIED. Let’s get to the briefing. Today, we are going to make sure you are playing with your head as well as your weapons. That’s right: we’re talking about Situational Awareness. This will be part 1 of a two-part series.

When I lose a game, I always ask myself why. Was there a serious lack of communication? Was your team not playing like a team? Or was it a sheer loss of focus in the objective of the game?

Most of the time, it is a combination of all of these, but I do find myself wondering why a teammate cannot see a stealthed player come up behind them and ninja a turret that they should be guarding. It is incredibly frustrating to lose a game based on the fact that there was a dumb mistake made. It is even more frustrating when I am the one that made it. There are seven ways to be situationally aware that I have learned in my time spent in Warzones. Today we will look at the first three of these ways: Objective Control, Enemy Movements, and Status of Allies.

Like I mentioned earlier, stealthed players can be a real pain in the behind. Watch for them. Angle yourself so you can see both the approach of the enemy and the objective you are guarding. In the first picture here, I use the corner of the stairs while guarding the turret to reduce my profile, while simultaneously providing a way to watch the west turret, the approach from the middle turret, and a quick turn allows me to watch the little drop-down from the catwalks in the middle turret and the approach from the tunnel. 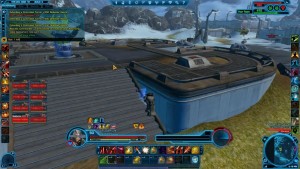 In this picture, you can see that I am actually attacking an enemy away from the door in Voidstar, but I have my camera angled towards the door. I frequently sit like this, as it allows me full ability to use my rotation, while simultaneously watching for stealthers. In fact, since they think I am looking away from the door, I sometimes get them to pop out because of this, which allows me to accurately gauge the strength of the enemy force at this particular door. 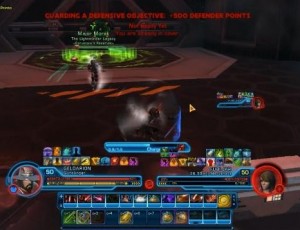 In Huttball, it is very important that you keep track of the Huttball. You should always know where it is, because it should have a bearing on the way you are playing at that moment. If they have it and are near their endzone, they might throw it away, so it is useful to get to mid to try to snatch it. If you are close to the enemy ball-carrier, you may want to block them off, or separate them from their support. If your team has the ball and they are close to the endzone, you should again try to get ready to snatch it up when they score. In another infinite number of ways, knowing the position of the Huttball is very important.

It is very easy to get tunnel-visioned and try to burn people down while at the turrets in Novare Coast. While this may be useful, you might miss if someone is trying to take the turret, and it may be too late to catch them when they have been at it awhile. Try to keep an eye on people around you to see if a well-placed attack may be warranted.

You will want to make sure that you watch the middle of the Huttball arena. You want to know where the nearest enemies are so you can get to the Huttball first. Controlling mid in Huttball is one of the most underrated strategies. The simple fact is you can let them get the first point to gain control of mid, and you can win 6-1. Keeping the enemy on the defensive is important, so it starts by being aware of the enemy’s presence in mid.

The tunnel connecting the east and west turrets in Alderaan Civil War provides for a great staging area for surprise attacks. You want to watch this approach as well as the one from the middle turret. You want to know the earliest that anyone pops their head out of the tunnel.

Dwindling Numbers at a Door in Voidstar

If you think you are “winning” a door when on the defense in Voidstar, that means you are probably losing the other door. Make sure that you balance the ratios of the defenders as you go. If you are the stronger force with five vs. one at the west door, that means that the east door is getting hammered seven vs. three. Balance it out so that you are no more than one person stronger at your door, with preferably no fewer than two total. This really goes for any defense-based objective game.

Novare Coast is unique in the fact that you can see a very far distance. If you stand in certain places in the map, you can see practically the whole thing. Use that to your advantage. As you fight, watch the movements of the other turrets and see if you can prevent attacks. Here you see me strafing to check out the situation at the approach from east to west while I am heading to south.

They are the stalwart defenders of the massive cannons that will bring you victory. They are the final line, the crucial links, and the protectors of success. And let’s face it, sometimes they can be real idiots.

It is not infrequent that the defender of the turret – that when lost will ensure your defeat – just decides that he is bored and wants to leave. This is a bad thing. It helps to keep an eye on your turret defenders, especially when you are in a PUG. A quick glance at your map will tell you if anyone is there.

Sometimes the defenders are doing their job, and they get attacked. It is helpful to know who is over at the turret defending, so you can glance at their health bar every once in a while to check and see if they are still alive. This can be helpful if communication is poor as well, since you can help call out danger if they are taking damage.

Need to Team Up?

Sometimes, when you are heading to take a turret, your allies are right behind you. Sometimes, they are a little bit farther behind you than you would like. It often helps if you can allow your teammates to catch up to you before you head over to the turret, as a single two vs. two battle is going to go better than two individual two vs. one fights. If you wait for a bit, your teammate can join you, and it won’t hurt the flow of the match by more than a few seconds.

Sometimes, you don’t want to tank or heal in a Warzone, and I get that. It often helps to occasionally throw out a guard or a heal or two. Staying aware of your allies’ health can make the difference in a close match. If you are a tank, and you are not the one with the Huttball, switch to your tank stance and toss guard on the ball-carrier. It will keep him alive longer, you can probably still take more damage than him, and you will probably survive it pretty well even if you aren’t in tank spec.

Let me know what you think about these strategies in the comments below, and join us next week for part 2, where we will discuss Buffs and Debuffs, Healers and Tanks, Support Skills, and Kill Timing.