The final boss of the operation Terror From Beyond named… The Terror From Beyond is more of an endurance fight rather than a dps race. This doesn’t mean that the dps can slack off, but they shouldn’t be in a hurry, especially in phase two of the encounter. This fight isn’t as fast paced as Operator IX but there are still plenty of mechanics in place to trip you up, especially if you don’t fully understand them. We’ll walk through step by step of what happens during each phase so you know what to expect and how to deal with them.

You will want to split your group into two with a tank, two dps (1 ranged/1 melee if you have them) and one healer in each. One healer or ranged dps with good awareness from each group will need to stand away from the tentacle group during phase one. This is so that the acid spits from the boss do not land in the tentacle group. Technically, only one person needs to be at range but having an additional person as insurance never hurts.

Tip: If the ops member at range can put the tentacle between themselves and the boss the line-of-sight will make the acid spits less likely to hit them.

This phase is, for the most part, the same as story mode. The differences are that the tentacles have more hit points, there are more acid puddles and the damage from the various mechanics such as tentacle slams hit harder. The biggest difference is the addition of the Hypergate Beacons which will spawn and start pulling one of the two ops members who are standing away from the tentacles. If the Beacon successfully pulls them in the player will die instantly. The Beacons are destroyed pretty quickly, but you have to be ready to switch targets when you see them.

Tip: An easy way to predict the Beacon arrival is with a swirling circular graphic that will appear. The graphic won’t have a name but if you see it spawn, you will know that the Beacon is not far behind. Keep in mind that the Beacon won’t appear where the graphic anomaly is, it is just an indicator that one is about to spawn.

If your group’s rhythm is good, you should see the Beacon spawn at about 65% then, shortly after, a set of Unstable Larva adds will appear. Kill the Beacon, kill the adds, then get back on the tentacle. At about 20% a second set of Unstable Larva will appear. Kill them quickly, then finish off the tentacles before retreating to the water to avoid the Birthed Larva. On occasion, you will see a random Hypergate Beacon appear just before the Birthing. If so, just kill it quickly and retreat back to the water’s edge. Remember to give the Birthers a wide berth as they do quite a bit more damage in Hard Mode if they burrow and explode on someone.

This is a rinse and repeat phase for about 4 cycles. After the final tentacle is destroyed the group will be teleported into the hypergate where you will begin phase two. Tanks should change their guard over to the healers for phase two. The best time to do this is before the last tentacle dies. By that time the tanks will have enough aggro and won’t need to have their guard on a dps.

This phase is probably the hardest for the dps as it is up to them to kill tentacles, anomalies and irregularities while jumping from platform to platform. At the same time it is probably one of the most fun fights as dps because of this fact as well. Tanks aren’t too stressed during this phase as all they need to do is swap when they get the scream debuff then run up to the starting platform to cleanse the debuff before getting back to position to tank. Healers have it easiest as all they have to do is stand on the starting platform and heal. The only time they should have to move is during the soft enrage towards the end of the fight. That being said, there is quite a bit of damage that is going out, but there are no mechanics in place that will force them to move during most of this phase. 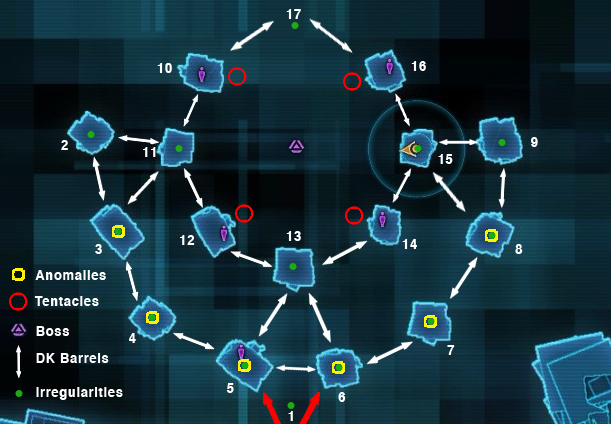 The graphic above is going to be useful when describing positioning. If you split the map down the middle, the dps and tank that was on the left tentacle in phase one will head off to the left while the right goes right. Healers will remain on the starting platform (1) for most of this fight. From platform 1 the healers can see everyone on the field and heal them without line-of-sight issues with the exception of platform 17.

Tanks: Start on platforms 11 and 15 and switch between 10 and 16 respectively during the first sets of tentacles for the acid spits. When one tank is hit with a scream the other must taunt off and begin tanking. The tank with the scream debuff must make their way to platform 1 where the healers are and stand in a darkened area on that platform to cleanse off the debuff before making their way back to their tanking platform. During the second set of tentacles, the dps will need platform 10/11 and 15/16 so tanks will need to shift over to 12 and 14 while sharing platform 13 to avoid acid.

DPS: For the first set of tentacles, all dps will go to platform 13 until the tentacles slam down. The left side dps group will go to 12 while the right goes to 14. DPS will have to kill three sets of tentacles during this phase before you get to the soft enrage. While killing the tentacles they will cast Hypergate Anomalies when they reach about 75% and again at 50%. Take a quick glance around at the upper levels. Left group will look at 2 through 5 and right side will look from 6 to 9. If any Anomalies appear the dps for that side will have to jump over and destroy it. Once down, return to your spots and kill the tentacles. Remember that the cast will not always spawn Anomalies so look before you leap. 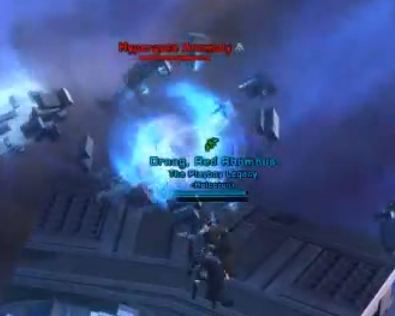 Once the first set of tentacles are killed the Terror From Beyond will begin to channel Hypergate Irregularity. This will spawn Irregularities on the platforms where you see the green dot on the map above. DPS will need to split and kill them all, preferably before the channel finishes. If any are still up, they will begin to do AoE damage to the ops group until it is killed. 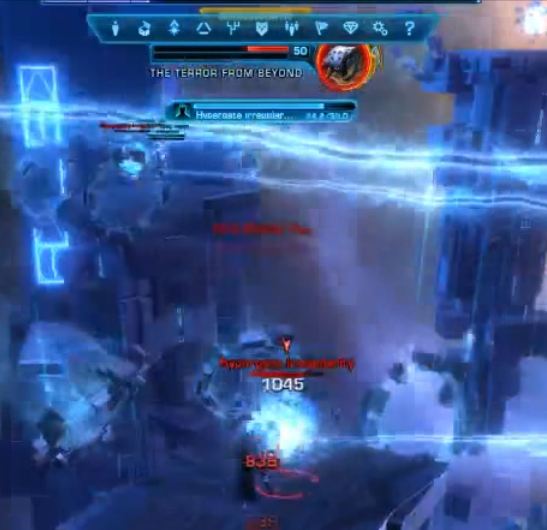 The dps cycle will continue for two more rounds. When the last set of tentacles reach about 10%, one of the dps should announce this, break off and find another platform to stand on while leaving the last dps there to finish off the tentacle. When the announcement is made, one of the healers should leave platform 1 and continue healing. Tanks will need to be ready to take turns taunting, knowing who will pick up the boss first. Once the phase begins the boss will randomly drop aggro and go after another member of the operation. The other tank should be ready to pick up the boss when this happens and the tanks will take turns taunting. The random aggro drop is timed just long enough so that both tanks have to coordinate their taunts. Save your AoE taunt as an emergency. Healers heal your hearts out. DPS will burn down the boss. You only have to reach 3% before the Terror From Beyond is forced back into the depths of whence it came.

This encounter is about 15 minutes long in total, so pace yourself. Again, this is not a dps rush on the tentacles. Take your time to look around for Anomalies and Irregularities as you enjoy the scenery around you. Bioware did a great job on this encounter and, while it starts out a little slow, the visual appeal and the mechanics are inventive and challenging. After the initial learning curve, your team should get used to the mechanics and it will become second nature. Have fun with the fight and keep at it! Good luck and see you for Nightmare Mode Denova!

No Responses to “Operation: Information – The Terror From Beyond Hard Mode Strategy Guide”