I have a confession to make.  It’s not the most exciting or embarrassing revelation, but it rings true on this forum.  My problem: I know $%^&-all about computers.  I mean, I’ve learned enough to keep things running and delete my porn history (sorry for how long that took me to figure out, dad), but the actual riddle of the hardware is beyond me.  That little system requirements box means I’ve gotta take notes in the middle of Best Buy to figure out whether or not I can run something – usually I leave it up to my more technically competent friends to give me the final word.  And thanks to my luddite anxiety, I’ve failed to keep my PC running up to speed.  By my calculations, the PC I’m working on right now is just over 7 years old.  My computer’s so old – how old is it, Noah? – it’s so old that every time I boot it up it tells me to get a haircut and sits me down to talk about the war.  My computer’s so old that I’m pretty sure it won’t even be able to run SW:TOR.

But that didn’t stop me from trying the other weekend.

The other week I got two beta invite codes in my email.  I forwarded one on to a friend (who ended up sleeping through the entire beta weekend) and we both anxiously waited for the email that would tell us what exactly we needed to do with these codes.  I then followed the email instructions and downloaded 20+ gigs of software to my rig (featured below).  My download started at about 5:30 in the evening, I whiled away the time by heading to my parents’ house for pork chops and a load of laundry.  I came back later that night to discover my computer still chugging along with the end nowhere in sight.  The numbers were moving once in awhile, so I figured nothing had broken yet.  When I went to bed at 1:30 I observed that my download was still marching along and my wireless had not (miraculously) cut out as it is apt to do.

The next morning I threw off the covers and leapt to my computer to discover things had managed to download without incident.  I fired up the launcher, excited to get into things, but it decided to download another 5 gigs of whatever, so I ended up watching an hour of cartoons instead.  I clicked on the launcher icon from my desktop and said a silent prayer to any techno deity that might have been listening.  I held my breath as everything loaded up, then I gasped and spat a bit because it took closer to 15 minutes for the opening cinema to start playing.  I had lagged my way, step by cumbersome step, into the golden city. 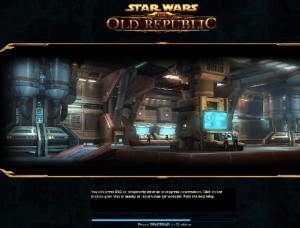 I spent an uncomfortable percentage of my life looking at this screen.

I started out by choosing the PVP server Fatman since the historical connotation amused me and because all the PVE servers had 2-3 hour sign in queues.  The character creation docking bay sputtered to life layer by layer, my PC silently straining under its burden.  When the character builder had finally loaded, I’m pretty sure my neighbors could hear me shout “OH THANK GOD THEY DON’T LOOK LIKE THE CLONE WARS” – then I toggled through 30 different scar options (I hope the Star Wars universe is prepared for the number of facial deformities its about to unleash.)  Things came to a crashing halt every time one of the background animations decided to trigger.  Once I had given my Jedi Knight his David Tennant haircut, it was time to let him guide me through the opening levels. 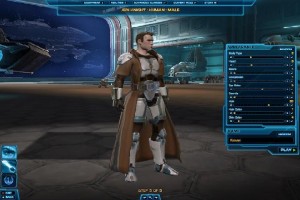 After another foray into the load screen, I stepped blinking into the new world of the Jedi Knight starting area.  Aside from the temple master, the first thing to greet me was general chat – their current topic: an apparent contest to see just who thinks WoW is the gayest.  I put off my first quest to adjust the settings and was immediately dismayed to see that the graphics were locked at the highest setting.  I could knock the shadow and detail settings back to the Duke Nukem 3D stone age, but it seemed BioWare was determined to keep things from running smoothly. 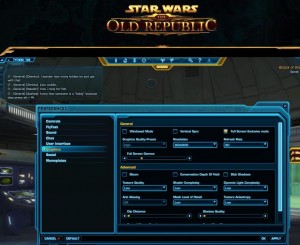 10 minutes later and my settings were as crippled as I could set them and the ultra clever quips about WoW being for queers and the casual community (I assume these people answer every scenario of seven years of faithful service and maintenance with a lobbed mouthful of vitriol (these will be the same people pointing out every minor flaw in SW:TOR and citing it for the reason they’re leaving forever in 5 years when Guild Wars 2 finally comes out)).  I pointed my avatar at the only other character in the room and moused over the adjacent character.  The icon switched to something suggesting dialogue, so I clicked.  Nothing.  Then I right clicked.  Still nothing.  I furiously mashed the mouse buttons and, to my horror, the screen locked up and went black.  However, instead of a crash screen my computer treated me to the most belabored dialogue cutscene.  Some herky-jerky introductions were made and my new instructor decided to test me by sending me out to whack stuff with my practice lightsaber.

My digital self managed to both drag his feet and appear to be floating in a Tom & Jerry display of wildly splayed, mid-run legs as he made his way through the tiny hub.  At the edge of town I didn’t immediately see the monsters I was tasked with finding, but I did see their floating health bars.  I lagged into combat and felled 3 of the beasts before they rendered and I observed they closely resembled Street Sharks.  Combat flowed rather smoothly, but occasionally there’d be a lag spike and my character would suddenly find himself with his back to the monsters he had previously been thrashing.  No way was PVP gonna work out for me.  I finished off the 10th monster I was to dispatch just as general chat devolved into 20 people quoting Family Guy. 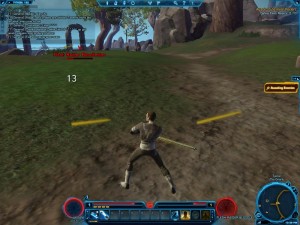 I’m sure the casual observer would have no difficulty piecing together what’s going on in this screenshot.

I returned to town for my quest reward, sold off some beads I had found on the monsters and got sent on my way to kill an allotted number of a different type of monster after another near-fatal dialogue sequence.  I came back to general chat ignoring a player’s pleas for help with a quest to brag about how much they drink.  Some argued that real men only drink beer, while others believed a true man is gauged by how much liquor he claims to consume.  One poor soul touted that he had already had a 5th of vodka (this was about 12:30 pm, Eastern Standard Time) and I informed him that he should consider going to the ER.  Then I walked into the woods and killed some cat monsters because they were the nearest thing in the game that could satisfy my sudden need to make something die. 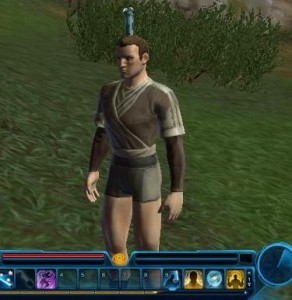 No MMO is complete without equipable short-shorts.

My quest track lead me into one of those zoned areas within a cave.  I hoped that would cut me off from the chatter of my indolent peers that appeared to have preregistered for a very expensive version of IRC, but I was wrong.  As my Jedi Knight came to the realization that all was not right in his world, I groaned and continued to watch the argument about when, exactly, WoW got gay – it was basically a reversed list of expansion releases.  From the way the argument went, I’m assuming the closer your answer is to Burning Crusade, the bigger we are to believe your penis is.  As I traveled to the next zone, the much larger one with the Jedi temple, my computer begin to sag under the strain of outdated processors and my own increasing irritability.  The path I traveled angled at roughly 45 degrees and the angle of descent, coupled with the modified lag physics meant my Jedi sailed down the hill in a perpetual half tumble.  I walked in the temple doors and lag took the wheel.  In a display I like to refer to as “Weaponized Lag”, every graze of the directional key sent my character rocketing off in that exaggerated direction as he fishtailed wildly down a bright hallway full of stunned onlookers.  Near the end I connected with one wall and proceeded to run in place until my computer found suicide to be the only option.

I did not try to run SW:TOR again.

I came away from my experience comfortable with the solidity of the game’s mechanics, every time I’d log out and the in game menu would prompt me for a crash and lag report I’d include a brief, apologetic note to BioWare stating there was catastrophic lag, but it was totally my bad (I knew not to expect much, my PC’s crashed from Minecraft).  The community was as insufferable as any, but that’s to be expected with any internet group – I’ll maintain a lifetime subscription on the promise I can leave the general chat channel.  For right now, though, I don’t think I’ll be seeing you guys in game until a serious upgrade or BioWare surprises us with a Mac version.