Each week we will spotlight a member of the SWTOR community and get him or her to answer ten slightly off-the-beaten-path questions. Feel free to answer the questions yourself in the Comments section!

This week we highlight, Sunny Ravencourt of Sunny’s Diner.  We find that Sunny puts oysters on almost everything and is a fanatic about “The Deadliest Catch” reality show.

Comments and more after the jump…

Q: What was your first video game obsession?

A: I think I put a TON of time into a game called “baseball” on the Sega Master System.  I remember that I had to wait until I was going to my grandmothers house in Winnipeg to get it.  We were going on a Wednesday.  I waited forever for that Wednesday.  To this day, when I think of Wednesday I get bizarrely excited.  I guess that’s the most excited I’ve ever been for a game prior to SWTOR.

Q: What is your guilty pleasure, snack-wise?

A:  I’ll put seafood on anything, and my wife absolutely hates that I do it.  I buy these little cans of oysters, and I’ll throw them into all sorts of junk.  It drives her crazy.

Q: Describe what you did last Sunday afternoon.

A:  I cut down 3 trees with a chainsaw and then played hockey.  Seriously.  You just happened to catch me on the most manly of Sundays in recent memory.

Q: What video game have you not yet played that you know you should?

A: Skyrim.  Just a terrible release schedule on top of TOR.  A guy at work is going to lend me his copy, and I’m having an internal battle as to how much TOR time it’s going to occupy.

Q: What game did you most recently play? Thumbs up or thumbs down?

A: Other than the obvious?  I played Shogun 2 and Civ V quite a bit.  Like any self-respecting nerd, I’m obsessed with Japan and Samurai stuff.  Shogun 2 is just awesome.  And Civ is … well… Civ.  I’m like a heroin addict with Civ, which makes me pretty much like any persons that’s ever loaded up that game.

Q: What TV show do you watch faithfully and why?

A:  The Deadliest Catch.  I’m an absolute fanatic about it.  It’s the best reality show ever made.  I see every episode the night it comes out and (this is true) have a crab feast with my wife on the season opening episode.  It’s just so honest and real.  These guys don’t give a crap that they’re on television.  Other than the paycheck, they probably hate it.  Oh, and guys DIE.  Some of these guys on this show literally do not come back.  It’s freaking insane.  Greatest show ever.

Q: What was the last song you listened to on your iPod?

A:  I have trained my 19 month old son to react like a Pavlovian dog to the opening theme of Clone Wars.  I have it on my iphone and he asks for it all the time.  He gets very excited.

Q: What bad habit do you have that you hope no one notices?

A:  I chew my nails and crack my knuckles.  Been doing it since I was born.  I’ll never break it.  It drives me crazy, but I’m locked into it for life now.

A:  This is really a tough question. 2 things come to mind.  I had a Chewie figure that I lost in the couch for something like 5 years.  I was so stoked when Mom pulled it out and said, “We Found Chewie!!”.  I also knew this Egyptian guy named Chiraz Fouad (coolest name ever) who had EVERY star wars figure.  My mind exploded when I saw his collection.  It was nuts.  The toys were definitely my first experiences with Star Wars

A: A Soundrel because I think they’re going to be wildly underpopulated and I have to be different for some reason.

Q: Bonus Question: What is your catch phrase?

We want to thank Sunny Ravencourt of Sunny’s Diner for participating and being such a great sport!   Don’t forget to listen to Sunny’s Diner podcast! 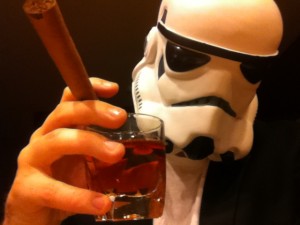