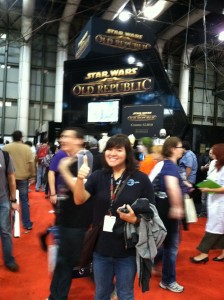 More Fansite Face-Off, link to video, and Comments after the jump.

It’s noisy and I am two drinks into the evening, which is almost my limit if I don’t want to have to go and take a nap in a corner somewhere, so I am not paying close attention to what he is organizing, but hey, I’m all for socializing and networking with the rest of the SWTOR community! I give Damien an enthusiastic thumbs-up from the Corellian Run Radio gals.

Wait, I Agreed to What?

Later, it dawns on me that Damien was talking about something PvP-related. As in, I would have to PvP in front of everybody. Also, by now I have figured out that Damien is representing TORSyndicate, which means that there will probably be videotaping involved. Hooray?

Flash forward to Saturday: Roxanne asks when the PvP event is happening. In my mind I am thinking, “Hopefully never,” but instead of saying that out loud, I take out my phone and send Damien a Tweet to confirm the details. Tweeting at the convention center is a dicey endeavor, and there is always the off-chance that I will be able to blame my non-participation on epic communication failure. However, Verizon’s reliability – yesterday’s blessing when I was Tweeting the SWTOR panels – is now today’s curse.  We have a time and a place. It’s the Hatfields and the McCoys at O.K. Corral, 4 pm sharp.

Roxanne says something about a one hundred dollar pool.

She rolls her eyes and says, “Oh, Mom,” by which I know she is joking.

Fun fact: the phrase “Oh, Mom” is something I’ve been hearing a LOT this weekend. It is used to denote that mix of fondness and disdain reserved for those you are truly close to. It also tells the listener that whatever he just said is so ridiculous or incorrect that it is not worthy of either correction or comment (“Are those Transformers?” “Oh, Mom.” “Ohhhh, that picture Jeff sent us was Batman.” “Oh, Mom.”).

In Which Kathy Tries to Get Out of PvP

The hour of reckoning draws near and Roxanne and I find our way to the SWTOR booth. I have a brilliant idea that under the guise of being generous, I can give up my slot to one of the other sites. This plan doesn’t work because every site I approach already has someone in, plus any time I tell Damien I’m willing to give up my slot he says no no, there’s room.

Meanwhile, Damien is polling the participating fansites to get a feel for the level of PvP ability in the mix. Representatives from various fansites in the SWTOR community start filling out the roster: Jen’Jidai, Fragworld, Guild Umbra, TOR Syndicate, NothingGaming, TOR-Talk, TORWars, Darth Hater, Keyboard Heroes, The Cantina Cast, TGN.

With such unscientific measurements, who knows what formula Damien is using to form the teams. All I know is that Roxanne and I have been put on the same team, the Republic. I am clearly in camp #2. Normally, I would put Roxanne in camp #1, but she has had very little hands-on time with this game, so all bets are off.

I have not given up on my idea of being a Fake Samaritan by selflessly giving up my spot. I think I have struck gold when Jeff from TORWars shows up and says he’s not on the roster yet.

“Oh! You should definitely take my slot,” I insist. “TORWars should be represented!”

But when I scurry over to tell Damien that Jeff is taking my slot, he just scribbles stuff on his piece of paper, like a baseball coach figuring out the perfect line-up. “No, it’s ok. There’s room.” 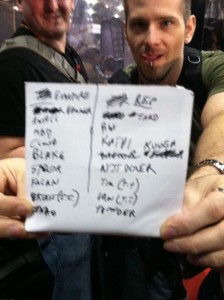 Justin from Jen’Jidai approaches Roxanne and me. “All right, ladies, let’s talk.”

He ushers us to a more private section of the hall, the way people do in television, exactly four feet away from the spot where we were just standing. Strangely, it sort of works, although Adam from Keyboard Heroes tries to pretend that he is on the Republic team so he can hear our secret strategy. We shoo him away.

In the end, though, all of Justin’s wisdom is vaguely useless because most of it was based on the assumption that we would be playing Huttball, which is what Eric Musco led us to believe when we first arrived.

Fun fact 2: for some reason, the BioWare folk do not have complete control over which warzone pops up for each play session. They tried to game it so that the fansites would play Huttball, but there is still a random element to spinning up the warzones, so when it is our turn, the SWTOR gods select Alderaan. Time to blast away at capital ships!

The only seats left are the Jedi Knight Sentinel and the Jedi Consular Shadow. Roxanne grabs the Knight since she played that at PAX East when we did Taral V. That leaves me with the Consular, which I have barely touched before this day. Oh joy.

Brandon is Not Helpful, Brooks Is

Brandon Miletta wanders up. “Brandon, come here and push the buttons for me!” He laughs and wanders away because he thinks I am joking.

Brooks Guthrie comes by next. “You’re a Shadow, so you want to throw things at people.” He shows me which button throws things at people (3), plus another yellow button, which I can’t remember what it does, but I move it to the 5 position. For the entire match, those are pretty much the only buttons I use.

Those two buttons, staying with my group, and my one PvP move – running through the opponent and jump-spinning 180 degrees to nail him with something, anything(!) – keeps me on the winning end of most encounters. That, and Justin’s Guardian guarding me a ton. Tanking in PvP, fantastic! The comforting streaks of tracer fire from the upper level tells me that Jeff’s Gunslinger has our backs when we go after any stray Empire players that try to take our turret.

The Empire’s Final Rush to Cap

In the last minutes of the game, Empire rushes us. Two Marauders and an Assassin charge in, three against three. The invaders attack Justin and me, leaving Jeff to snipe them and toss explosive stuff from above. Justin’s Guardian eventually goes down, but not before he eliminates the Assassin. Meanwhile, two Marauders are all over me as I leap around like a deranged click beetle, flinging giant chunks of earth. Jeff keeps his cool and concentrates his fire power on my target until one of the Marauders is toast.

Now there’s only one Marauder left, but my health is getting low so it’s not a sure thing by any stretch. Jump! Throw rocks! Up the stairs! Down the stairs! My health is down to a sliver, but so is the Marauder’s. Gunslinger Jeff keeps pumping high-powered shots into the enemy.

Just when it looks like I am not long for this world, Justin appears out of nowhere and Force Leaps that Marauder’s ass at the exact same moment that my last chunk of earth smashes into his face. The Marauder falls to his knees. The left turret remains under Republic control.

At this point I start hearing the people around me predicting a Republic win.

This surprises me. For the first time I look at the score and watch the numbers clicking down for the Empire. I look up at the Empire ship in the sky and it is clearly in trouble. The hull is blackened and huge plumes of smoke are pouring out.

“Looks like the Republic isn’t even doing anything, they’re just watching the ship go down,” says David Bass.

And it’s true, at least at our turret. After fighting off that one last wave, Jeff, Justin, and I gaze serenely at the ship’s death animation.

“Look at all those holes,” Jeff observes. “That doesn’t look structurally sound to me.”

A few seconds later, David calls it. “The match is OVER. The Republic has won!”

The Imperial ship takes a nosedive into the mountain range and there is much celebration on our side of the booth. Much love to our fellow teammates in win: Justin (Jen’Jidai/Fragworld), Kuuga and Mako (Darth Hater), Jeff Hollis (TORWars), Tim and Ian (TOR-Talk).

“Picture! Let’s get a picture of the winning team,” I shout. Thanks to Darth Hater for this great shot:

After the match there is some trash-talking and demands for revenge, and even some accusations that the teams were stacked (this may actually be true, although if it is, that means Damien stacked the teams against his own fansite, so you can’t accuse him of self-favoritism). We all promise that we are going to meet in-game when SWTOR goes live and have the re-match to end all re-matches. Fansite Face-Off II, anyone?

[editor’s note: for a look at the final minutes of the match, watch the Darth Hater video here. First half is Jeff, Justin, and Kathy fighting off three Empire players as they make one last attempt at capturing a turret.]