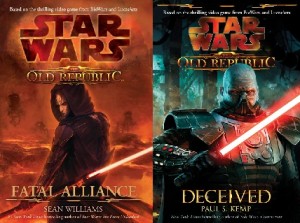 Before these books, I had never read a Star Wars novel. Shared universes are always a bit iffy, to me. From the impressions of many of my friends, second-rate authors tend to write mediocre, clichéd novels in shared universes, depending on the popularity of the license to carry them. Since I want to be a writer for Bioware one day, though, I’ve decided I need to explore all of Bioware’s universes – or in TOR’s case, sections of universes – in order to have a full understanding of the lore.

More Fatal Alliance vs. Deceived and Comments after the jump.

Fatal Alliance was my first Star Wars novel, and it confirmed all of my fears and reservations of reading one. Deceived, on the other hand, relieved my distaste quite a bit. Now, there’s a lot I could complain about writing-wise for both books. Instead, I’m going to concentrate on what’s most important to me in any creative medium: the characters.

Good characters develop over time. They have realizations and changes that make them feel like living, breathing people. Time is key to that process, and Fatal Alliance dedicates too little of it to characterization. It’s a very plot-driven book, rather than character-driven. You read on in order to find out what happens next, to find answers to a mystery that’s set up from the very beginning. The problem with this type of story is that characters often fall to the wayside, and overly-done archetypes and clichés fill in the blanks.

Shigar, the Jedi, is possibly the most obvious example of this. There isn’t much to his personality. The only semi-interesting thing about him is his block: his inability to use one of his unique force powers. That kind of thing has been done better and more extensively in other works, however: Nynaeve’s difficulty to grasp her power without anger in the Wheel of Time series and Clark’s inability to fly in Smallville are much better examples of characters who have yet to reach their full potential due to fears, anxieties, and other personal reasons. Not only that, but Shigar’s block is solved far before the climax. After that, Shigar becomes even less memorable.  He’s a stock Jedi Padawan with nothing new to offer. It diminishes my faith in the possibility of interesting Jedi who aren’t clones of those we’ve seen in the movies. 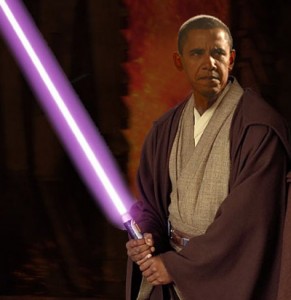 Can we spice up the Jedi archetype? Yes We Can.

My opinion is much the same for the other fatally allied characters. I was actually semi-impressed with the Imperial Agent character, Ula Vii, in the beginning. Ula himself wasn’t altogether interesting or unique, but his undercover situation is my favorite part of the book. Whenever a simple informant is suddenly given the opportunity (but not permission) to do some real sabotage, it has to be interesting. My interest waned, however, when the book decided a completely out-of-nowhere love at first sight moment was a good idea. It was forced. I didn’t feel that Ula was falling in love because he was the kind of person who would fall in love at first sight; I felt he was falling in love because it’s what the book demanded, to throw in another conflict for conflict’s sake.

Ultimately, I think the biggest weakness in the characterization is that it doesn’t feel dynamic or even existent in most of the narration. Fatal Alliance is not about people; it’s about an event. That event wasn’t interesting enough for me to forgive the two-dimensional characters, whose only developments seemed unnatural and forced. My faith in Star Wars novels had become very disturbed.

Enter Darth Malgus of Deceived. At his very core, he is Sith. He vehemently believes in the power of passion and conflict. This makes him the perfect figurehead for what the Sith are, but what makes him an interesting, dynamic character is something that may seem contradictory to his darkness: Love.  Yes, Malgus, who leads the destruction of the Jedi Temple and the slaughter of all inside (and enjoys it), has feelings for another living being. It works because it doesn’t fall into the typical cliché: never does he almost turn to the light and become an upstanding paragon of humanity because of it. He is a terrible, evil person. He’s just one who’s in love. It opens a lot of personal conflicts. Passion may be the defining point of Sith culture, but emotional attachment is not encouraged. Is his passion for Eleena a strength or a weakness? You read Deceived because you want to know what Malgus decides and who he becomes because of it.

The other two characters have their own strengths, too. While they aren’t the most interesting characters ever written, the way both go against their archetypes makes them worth reading. A Jedi driven by revenge and a darker, much more realistic depiction of a Smuggler felt incredibly refreshing in the Star Wars universe.  If you want something that feels one hundred percent like the movies, Deceived isn’t the book for you. But if you want something that feels new and interesting in the Star Wars universe, give it a try.

If you haven’t yet, that is. Do you have your own impressions of Fatal Alliance or Deceived? Do you read this review, cursing, shouting “His opinion is WRONG” every other word? Well, that’s why we have forums and a comments section for you to give your view!

8 Responses to “Fatal Alliance vs. Deceived”