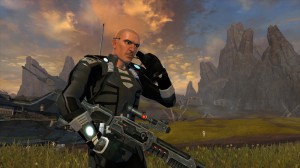 Praise the Friday Update gods, they brought us to the Promised Land!  After a dry season of no gameplay information, BioWare said unto its fans, “Have faith and you shall have your fill.”  But the people hardened their hearts and they cried out into cyberspace, the void of which is terrible deep, magnifying the clatter of voices in endless echoes of dissatisfaction.  And lo, just when the night’s gloom was unpierced even by the tiniest spark of hope and most silent, a light blazed across the horizon, and broke the spine of the dark, whining beast.  “Behold,” said BioWare, “We bring you glad tidings of great joy!  We give you the Imperial Agent, the smoothest of all criminals!  We give you PvP and Crafting!  We’ll even let you change that Advanced Class name you hated so much.”

And the beast retreated into its place of lurking and the fans were mollified.  For now.

Fact or Fiction (3:15): Can you pick out the confirmed fact from the tall tales?  This week’s host challenge is an all-Imperial Agent test.

From the Newsnet & Beyond(4:45): Roundup of the most important announcements and news.

Sith or Jedi? (43:40) We find out which path we walk in real life with The Test of the Leaf Blower