There are soo many different games and just as many type of guilds, it sometimes gets easy to feel lost in the shuffle. Some guilds are very driven and focus solely on being the very best, even if that means the cost of leaving some behind. On the other hand, there are some guilds that can be soo casual that many achievements are never reached. How is the best way to find a balance or is there even a way to strike a balance? This week we look at the guild, Crimson Shadow Legion. We will see how this multi-game guild strives to focus on finding the balance between casual and hardcore, as well as focusing on how to build strong ties and friendships to last beyond any one game.

More about Crimson Shadow Legion after the Jump…

Lets meet Visigoth, their guild leader, and find out how the Crimson Shadow Legion operates in the Guild Q&A section.

How did the guild get started? Is SWTOR the only game the guild is playing?

Crimson Shadow Legion (CSL) was founded in January of 2011, although under a different banner at the time. Comprised of a handful of friends in Everquest 2, the guild anticipated the launch of SWTOR from its inception. Variants of the CSL can also be found in Guild Wars 2, DC Universe Online, Star Trek Online, The Secret World and WoW, although our support of communities in each game is determined by member participation.

What faction and server is Crimson Shadow Legion associated with?

The CSL is primarily Empire based, but supports members in its Republic offshoot, the Crimson Shadow Guard. Both are on the Shadowlands server.

What style/type of guild would best describe CSL?

We are a casual multi-game guild, although we also strive to support members who have particular interests, such as raiding (Operations) and PVP.

Your guild runs two nights a week of Operation runs. What nights are these scheduled and does the guild use these raids to also help new members get properly geared?

We currently attempt to support four nights of Operations within the week. Tuesdays and Wednesdays are scheduled for “gearing” newer members, with the occasional Thursday run as well. Fridays are scheduled for the Hard Mode operations, with Saturdays as a clean up or separate Operation. This is dependent on the availability of members, as we do not require regular attendance, but instead schedule based on sign-ups. 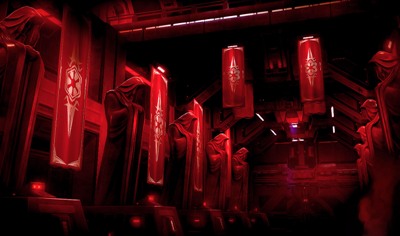 What level of importance does the guild place on group play and friendships? Do you feel this helps your guild grow?

The leadership of the CSL places a very high priority on the development of a community, and highly encourages (but does not require) the use of our voice server as a means for fostering that community. Use of voice has proven indispensable in creating long term friendships, and sustaining the guild.

How did the guild get interested in SWTOR? How long has the guild been active in the game?

As mentioned previously, the first incarnation of CSL was created in anticipation of the SWTOR launch. One of the original Officers (Goth) was a Star Wars fan from the premier of the first movie in 1977, and a former subscriber to Star Wars Galaxies (pre-CU and NGE); participation in SWTOR was a foregone conclusion.

How has the guild found the new content, Terror From Beyond Operation? With Patch 1.5 already added to the PTS, do you think this means BioWare is going to be able to maintain plenty of new content?

“Terror” has been generally welcomed as a step towards much needed content expansion. Most of our members believe that regular and substantial addition of content may be critical to SWTOR’s survivability. Some are concerned that the 1.4-1.5 update pace will be very difficult for Bioware to maintain as a standard, and that either the frequency or quality of updates will have to be compromised, resulting in a stretching out of the content trickle that may irritate less patient players.

In Patch 1.5, HK-51 will be available to found through a quest line. Is the guild excited about obtaining this new companion?

HK-47 is a universally loved character by our guild members, and many are excited at the chance to add a facsimile of the wickedly sarcastic droid as a companion. The scavenger hunt looks to also breathe at least some life into worlds that have had no need to be visited in some time, since reaching max level.

What sort of guild events or activities does the Crimson Shadow Legion sponsor for their members or for players on the server?

We strive to support Operations on Tuesdays, Wednesdays, Fridays and Saturdays, with PvP and random guild based events on Sundays. Previous examples of the latter have included things like World Boss hunts, Datacron searches, and fun scavenger hunts sponsored by the guild.

What are the guild’s thoughts about SWTOR adding a Free-to-Play option? Do you think this is something needed for this game or is it a change for the MMO genre?

Opinions on the F2P model vary amongst guild members. Some believe it was premature, and others think it was a necessary survival mechanism for the game. Most perceive a nefarious intrusion by EA, and have concerns for their intended direction, but hope to be proven wrong.

What sort of things sets the Crimson Shadow Legion apart from other guilds?

The CSL is envisioned as a casual MMO gaming community catering to an older demographic. While we don’t strictly enforce an age requirement, we try to look for a level of maturity that leads to an enjoyable and drama-free experience. We also attempt to prioritize the needs of our community over that of a specific game. As particular games fade in and out of popularity, we try to focus our attention on where the interested of our members lie, and as long as there is a significant interest in a game by us or our members, we will continue to support it as a guild. The hope is therefore to maintain a long-term expanding group of friends that stay with one another over the course of time, from game to game.

Is the guild currently recruiting? If so what classes/advance classes does the guild need?

We are constantly recruiting all classes, and attempt to adjust what we provide based on member participation.

If there are players seeking to join or find out more information on the guild, what are the best ways for them to contact the guild?

Any persons on The Shadowlands server can send a /tell to one of our Officers. These are listed on our website. Alternatively, persons can send an email to our Officers in-game, again referring to the list on our website. On the Republic side, persons would receive a quicker response by sending an email on the Empire side. Enjin users can also contact one of our Officers on the website. Lastly, we have a post in the recruitment section of the SWTOR forums, but that is not checked as often as the other listed methods.

Thanks to all the members of Crimson Shadow Legion for letting us learn more about their guild. Huge thanks to Visigoth for his help at replying to my questions and such quick turnaround on getting information to me, to make this article possible. I want to wish them all the very best in their adventures in SWTOR and as a group of friends in whatever they do. If you are on the Shadowlands server and looking for a group to run with on some missions or a guild to join send them a /tell or in-game mail.