Time for another Guild Checkpoint. This week we look at very uniquely named guild…Machiavellis Cat. We will find out more about how this name came to be and how this guild always tries to have some fun in all they do. Perhaps after reading about them you might think they are the purrfect guild for you. We welcome Liore to our guild Q & A,  to find out the answers about the origins of the guild, their attitude about gaming, types of games, and their “excellent” rule #3. Sit back and enjoy as we prepare to make the Jump.

More about this multi-faction guild after the Jump…

Machiavellis Cat is a very unique name, how did you come up with the guild’s name?

When the guild was created back in 2005, the trend was towards very serious names with lots of Latin or war terms. I knew from the outset that I wanted something that would stand out and be more fun. The name is technically a fusion of Machiavelli (famous for his thoughts about seizing power) and poor Schrödinger’s cat (famous for being both alive and not alive, and in a box). There was also a lot of beer involved.

Machiavellis Cat is into several games besides even MMOs, and in fact you all also play tabletop games. What games is the guild playing? How do you all play the tabletop games? Is it a social event that you all try to attend or is it played via the internet?

We started out strictly as a World of Warcraft guild, but it just sort of organically expanded as people’s gaming interests expanded. We’ve dabbled in most of the big MMOs and are of course huge Bioware RPG fans. There are almost always Cats playing Team Fortress 2 and multiplayer Minecraft as well — first we can stab each other in the back, then we can work together to build giant fortresses!

Our players are spread out all over North America, but there are a few clusters of folks in the Seattle and Washington DC areas in particular who play tabletop together. D&D is of course a big favorite, and we have some pretty devoted Magic: The Gathering players. A bunch of us enjoy painting Warhammer 40k minis and a couple of folks even play competitively.

The guild seems to be pretty laid back and friendly…rule #3 says it all for me “Be excellent to each other.” That said you all are serious about your games and in fact, Machiavellis is planning on having two guild chapters in SWTOR correct? Do you think this will cause stress in the guild, besides provide more work for the guild leadership?

Yes, we’re going to have both Empire and Republic chapters on the same server. I was a little sceptical about the idea at first, but it made a lot of sense once I tried the beta. I’ve played other MMOs for years without trying the other faction, but the story-driven nature of SWTOR means that most of us will want to see both sides. Additionally, I think the story causes people to bond with their character in ways that they haven’t in previous games, and when you add a morality system like Light and Dark you can start getting into some pretty personal decisions. Having chapters in both factions gives us the option of playing exactly who we want to play!

That being said, I know a bunch of us are planning on having “mains” on both Empire and Republic and we absolutely plan on running 8-man Operations on both sides.

Back to rule #3, how do you all promote the “excellent” attitude or is it recruiting “excellent” people or both?

My guiding principle for recruitment is to invite folks who I think I would want to have a beer with in real life. (And yes, that includes a 21+ age requirement!) No matter what we’re doing, from goofing off and leveling to seriously raiding, the number one thing I look for in new recruits is personality and how well I think they’ll get along with the rest of the Cats. We can teach folks some of the tricks of the game if they want, and we can help them gear up their character, but we can’t teach them how to be a nice person or considerate of others!

How did you first hear about Star Wars: The old Republic? What about this game has you excited or cause for concern?

I heard about this game shortly after it was announced. Bioware is making an MMO? And it’s set in the Star Wars universe?! Sign me up right now!

After many years of playing MMOs and RPGs that are set in the typical fantasy world, I’m excited to be getting into space. Lasers, robots, holograms, spaceships… It’s all going to be great. My one hesitation would be, not knowing what the game will be like at level cap. Having interesting group content is pretty important to me in MMOs, whether it’s running old Flashpoints or taking on new 16-man Operations, and it’ll be interesting to see what Bioware has in store for us.

Can you let us in on which faction, class and possibly advance class you plan on playing first and why? Did beta have any impact on your decision?

I usually play the “good guys” in faction-based games, so this time I am bucking the trend and going Empire! I went into the Thanksgiving beta fully intending to play a Mercenary, and came out absolutely in love with the Operative. I can spec for healing, stealth in warzones, and throw bombs. It’s like the class was made for me.

Is the guild currently recruiting? If so how can someone join and be a part of Machiavellis Cat?

We sure are! We’d love to meet some more smart and sassy adults who want to enjoy the content and maybe dabble in Operations later. Anyone who is interested is welcome to visit head over to the Machiavellis Cat’s site and also our forums and post an introduction. Better yet you can venture over to the server Space Slug and look for us in-game!

Thanks to all the members of Machiavellis Cat guild. Also huge thanks to Liore for all the help getting all the great information about the guild to share with the community. If you are looking for a fun guild, that is a bit on the “sassy” side, I would suggest checking them out! See you next week and as the game launches…”Be Excellent to each other!” 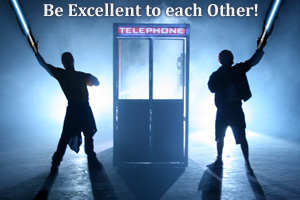 We are totally Jedi Knights!