Greeting spacers!  Another week has arrived and I hope you’re not suffering the Monday Blues.  Every once in a while I’ll be releasing a Force Lore Intelligence Report.  The information contained within the report will hopefully be of use to you, the reader, as an extension of the In-game Codex, clarification of bits of lore that are released by BioWare or LucasArts, or some of the jargon I use in the column on a regular basis.  Beware:  Force Lore Intelligence Reports may contain spoilers for in-game events, so readers use caution.  Now, stand by for receipt of Intelligence transmission. 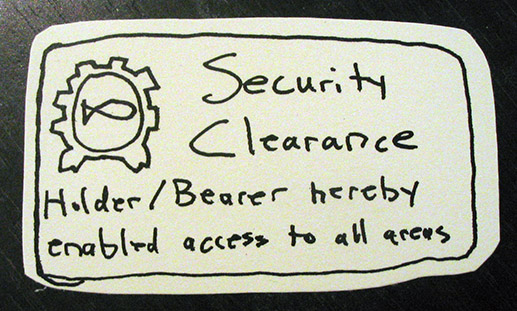 "This card entitles you to the utmost security clearance!"

As you read Force Lore, you’re going to come across some terms and abbreviations that I use frequently.  If you are not familiar with content from other Star Wars sources, other than the movies and Star Wars: The Old Republic, these may be strange and confusing to you.  Hopefully, I can clear up any questions that may arise from this crazy lingo.

1. BBY – This stands for Before the Battle of Yavin.  All the fans of the original trilogy will remember the fateful moments of the Rebel Alliance attacking the Death Star in a valiant attempt to destroy the space station and save the Rebel Alliance from annihilation.  This is known as the Battle of Yavin.  The Star Wars galaxy uses this event as the epoch of the current Universe’s timeline, viewed from the movie era, to dates both before and after events that occurred in the first movie.  I’ll be using this almost exclusively over any other methods of date reference.

2. ABY – This stands for After the Battle of Yavin.  This doesn’t apply to the events occurring in Star Wars: The Old Republic, but I will be making reference to events that apply to the stories that keep going after SWTOR.  Outside of The Empire Strikes Back and Return of the Jedi, this date applies heavily to New Republic, New Jedi Order, and Legacy eras.  Most of the stories are covered in the novels, video games, RPG supplements, and comics that focus on Star Wars events that occurred after all the movies.

4. Imperials – For almost three decades, the term Imperial applied to the bad guys from Star Wars Episode IV, V, and VI.  Now that the Sith Empire has come along in TOR, there are Imperials before “Papa Palpatine” takes over the known galaxy.  Any referrals to the Galactic Empire Imperials will be noted as such. (Note: Check out “Robot Chicken” on Cartoon Network’s Adult Swim to see where the “Papa Palpatine” comes from, if you don’t recognize it.  You can find it on Youtube.)

5. Eras – I make heavy use of the different eras that both George Lucas-Canon and Expanded Universe-Canon follow throughout most Star Wars sources.  These Eras are:

If you come across anything that you have a question about, please ask in the Comments section.  I’ll be more than happy to answer the best that I can.  If you want to read more on any topics that I address, check out Wookieepedia, the largest searchable Star Wars database/wiki there is.  There are also a number of truly great novels out for almost every era of the Star Wars Universe.  They’re a great read, even when they don’t involve the main characters from the movies.

I hope this helps.  Look for a regular installment of FORCE LORE very soon!  Until next time, spacers!  May the Force be with you, always.