Happy One year Anniversary SWTOR! Yes, today, Dec. 20th, is the official anniversary for the game. Oh what a year it has been. From the early days of players wandering around the starter planets trying to find those elusive datacrons, to attempting the harder challenges like the Explosive Conflict Operation on Nightmare mode, or to dominating the Ancient Hypergate warzone. Even as we look back over the past, we have gotten a glimpse of things to come in the upcoming year with the expansion titled Rise of the Hutt Cartel coming in 2013.

The name of the new expansion will be Rise of the Hutt Cartel. This news was released this week by BioWare on the official website. The expansion will be the first for SWTOR and is said the be coming Spring, 2013. It will be a paid expansion and include the planet Makeb, the level cap will be raised to 55, and continued story arcs which will also be fully voiced. For more details about Rise of the Hutt Cartel and even how to pre-order the expansion be sure to read these links on the SWTOR website and also the FAQ. 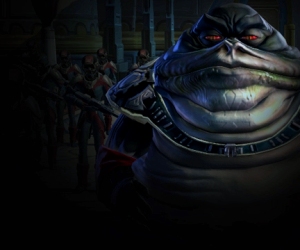 As many of you know December 20th marked the official one year anniversary. Speaking of the one year anniversary, BioWare is still looking for your in-game screenshot submissions to possibly be used on the official SWTOR website or the SWTOR Facebook page. BioWare explains the details for submitting your screenshots and we also have them listed below on how to be involved. You have from now till Jan. 2nd, 11:59PM CST to get your screenshots submitted…so what are you waiting for?

Screenshots should not be retouched or enhanced

We recommend turning off your User Interface

All submissions are subject to the Electronic Arts Terms of Service

So after you have your in-game screenshots:

Email your screenshots to celebrate_EN@swtor.com before January 2nd, 11:59PM CST.

To qualify to be featured, your email must include the following information:

The following is optional, but may be included in your email:

One sentence describing what is going on in your picture

In-game location where the screenshot was taken

How long you’ve been playing the game 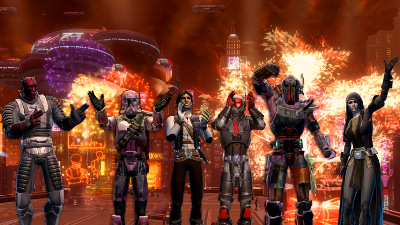 To give you all a better idea of Makeb’s scope, it’s a planet of equal size to our larger planets and it contains a variety of areas – sprawling mesas, underground caverns, garden estates, and more. It introduces faction-specific storylines, new Heroic missions and bosses, repeatable mission series, and new Datacrons! The 5 new levels will occupy players for a fair amount of time, and there’s plenty of content to get you there (including a lot of stuff tucked away for the explorers out there). Keep in mind that this announcement is just the start – as we approach Makeb’s launch, you’ll see more details about the content coming with Rise of the Hutt Cartel!

Hi everyone! While we can’t address every concern raised in this thread right now, we can reassure you that the gear you’ve obtained in our current endgame will continue to be relevant after the expansion is released, and it will provide a great bootstrap into the higher-level content offered by Rise of the Hutt Cartel. You won’t be replacing your Dread Guard gear with gear you pick up as you level, and thanks to improvements in the way item power is calculated, we won’t be handing out any entry-level gear at the new level cap. You’ll hear more about RotHC as we approach its launch, and we’ll continue to answer questions and provide more details!

We know you’re all very interested to hear about how the new level cap is going to affect your class, and I wanted to share a little information about the upcoming changes with you. As part of the new content, every skill tree will be expanding and you can expect significant updates. Players will earn a new skill point with each level, and new skills will be available in each skill tree. Additionally, a new active ability will be introduced for each Advanced Class. We’ll have more details about many aspects of Rise of the Hutt Cartel as we approach launch, so keep your eyes on the website and dev tracker!

We think players interested in lore are going to really enjoy the story in Rise of the Hutt Cartel, and I’d like to share a few more details – this seemed like a good thread for it!
The people of Makeb have remained neutral in wars between the great political powers in the galaxy. Relying on their wealth, isolation, and an army of mercenaries, the citizens have enjoyed centuries of prosperity. However, in the midst of the current galactic conflict, the Hutt Cartel has recognized the planet as a crucial stepping stone to increase their organization’s standing and reclaim the strength of their ancestors’ empire. They’ve hired Makeb’s mercenaries away and have made the citizens prisoners in their own homes, forcing them to reach out to the Republic in a desperate bid for rescue.
The Republic recognizes the Cartel’s seizure of Makeb as a bid for galactic power. With victory over the Empire seeming possible for the first time in decades, Supreme Chancellor Saresh is determined to respond to Makeb’s request for aid to stop the Cartel before they can become an even greater threat and compromise the Republic’s chance for victory.
Taking advantage of the chaos erupting between the Hutt Cartel and the Republic, the Sith Empire makes their own bold play for the hidden power of Makeb, seizing their chance to regain some of the strength lost to internal struggles and at the hands of the Republic’s military resurgence. They plan to outmaneuver all their enemies to usher in a new era of Imperial dominance.

All of these dev posts by Allison Berryman give us a bit more insight into what we might expect when the new expansion is released. However, since the expansion is not even mentioned to be released till sometime during Spring of 2013, it is probably best we hold off on any major panic attacks till closer to the actual release. Along those lines, I am more interested to see how they are coming along with making it possible for players to copy their characters to the PTS. That will not only allow players to find out exactly how the new expansion will work, but also give more players an opportunity to test and give feedback to assist the developers in making the expansion The Rise of the Hutt Cartel the best it can be. We have seen that BioWare has been listening to the testers feedback i.e. adding more quickbars to F2P players and Preferred Status players.

Over the past week there have been many news items, along with Carla and Deirdre hosting episodes #84 and #85. After you catch up on the past two episodes, don’t forget to take some time to catch up on your favorite CRR weekly articles. As you read our writers’ articles, be sure to take a moment and submit your feedback and suggestions in the comment sections. We love to hear from you. Thanks and enjoy the links below.

As we look back on this one year anniversary, there have been several ups, downs, strides forward and a few steps back. That of course tends to be par for the course with most anything. Star Wars: The Old Republic probably had one of the larger, if not the largest, build-up among the fan base, almost to the point it would almost be impossible to live up to expectations no matter what. That said BioWare vowed to bring the “story” pillar into the MMO genre and despite whatever people may say, they did bring meaningful story to a MMO game. Not only did they bring story, they brought the player fully-voiced gameplay to the MMO genre. Since playing SWTOR, I have tried other MMOs either in testing or actual live gameplay and the one major thing I found missing was the story element and fully voiced aspects that BioWare showcased so well.

Now there were and are definitely things that needed or need improving/fixing, it is by no means a perfect game…although there is no such thing as a perfect game. I do think since they have completed the switch over to the Free-to-Play option, they have been generating a fair amount of content on a very regular basis. Keeping to this model of bringing the players new content every 4-6 weeks is a necessity to keeping the player base playing. Now granted, they will never be able to please every gamer, considering how players reacted to the lack of a holiday event. I personally would rather they skip an event and focus on making the major content better. I am not against events, in fact I loved the Rakghoul event. On the other hand, the Great Race event was just okay. It felt thrown together and would have probably been better if they took more time to get it on par with the Rakghoul event. I would rather they keep focused on the new expansion and fixing bugs. Now if they are going to put the time and effort into the next event like they treated the Rakghoul one, then I’m all for it, but no thrown together events for the sake of having an event. As I finish my look back on this one year playing SWTOR, I’m still having a blast playing the game and will continue to play until they shutdown the servers.

Youtube user kingofkalamos has put together a really nice video looking back over this first year in SWTOR. He has done a really good job combining some epic music with well edited video clips. The video has scenes from almost every planet…it also has clips from Operations, Warzones and Flashpoints. It is actually pretty amazing how far the game has come and this video does a great job showing just that. I would urge you to take some time and visit kingofkalamos’ video channel and leave him a comment.

That is it for this week’s HoloNet Links. Please leave us your thoughts or suggestions in the comment section below. I want to personally wish all of you a very Merry Christmas and also Happy Holidays. May you and your family enjoy the season and be safe.